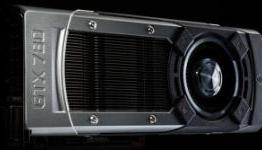 Gi - Nvidia is at it again with the NVIDIA 780 series that was recently announced by the popular graphics card manufacturer. This time, they have created the first in the new 7-series of graphics cards, the Nvidia GeForce GTX 780. Combine the chipset from the thousand dollar monster that is the aptly named GTX Titan and reduce the number of CUDA cores while increasing the bandwidth and clock speed. It’s technology tweaking at its best, seeing what yields the best results while making the smallest possible sacrifices. The only card released in the 7-series, the Nvidia 780 is a perfect fit, both in technology and price, between the GTX Titan and the GeForce GTX 680.