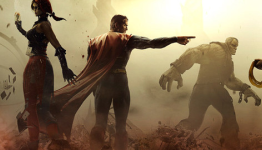 Injustice: Gods Among Us Review | DarkStation

DarkStation: "I had fun playing Injustice, but not as much as I wanted too. The combos and hits have a cadence and feeling to them that I’ve only found in NetherRealm games. It’s a sort of slower, rhythmic feeling and it’s not too difficult to pull off useful and reasonably powerful combos. When you’re executing a combo and trading blows with an opponent the game is as good as any other. The problem comes in with the games movement, which feels much stiffer than other fighting games. This is especially true of the jumps which, while fairly fast seems less organic and smooth then something in other 2D fighting games. There are a ton of projectile characters as well, and without a universal air dash it’s easy to become frustrated against those who simply spam those abilities. The fighting system isn’t bad, it seems perfectly balanced, I just didn’t particular care for the way the game moved. If the movement had been more fluid, I think I would have really liked this game a lot."

Adhttps://store.steampowered.com/app/1488200/Symphony_of_War_The_Nephilim_Saga/?utm_source=n4g&utm_medium=native&utm_campaign=sow_n4g_native&utm_content=png
- Comments (0)+ Comments (0)
TopNewestOldest
The story is too old to be commented.
100°6

Injustice: Gods Among Us is Free on PS4, Xbox One, and Steam; Links Inside