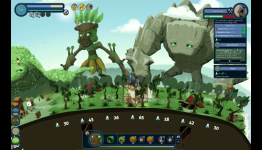 Quarter to Three: "Reus understands that a god game isn’t just about shoving stuff around and then watching other stuff happen. From Dust, for instance, took from Populous the idea that moving dirt around was sufficiently divine. But the difference between From Dust and Populous is the difference between a dump truck and a deity. Even gods need gameplay, and Reus’ gameplay is all about fitting together myriad pieces of a wildly imaginative ecology in the pursuit of a more prosperous planet.

BagoGames - Reus Review - On The 7th Day God was Bored