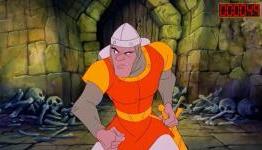 'I’ve been playing Dragon’s Lair since 1983 and it seems that I have been reviewing it just as long. This is my sixth (or maybe seventh) time reviewing Dragon’s Lair on just as many systems, which makes it surprisingly hard to keep coming up with fresh material. Ironically, the first time I ever played Dragon’s Lair outside the arcade was on PC when a much stripped down version of the game was shipping for PC on 5.25” floppies. Since then I’ve played and reviewed the game on nearly every console, not to mention Blu-ray, HD-DVD, and most recently, for the iPad. Dirk the Daring truly is gaming’s most immortal hero.'