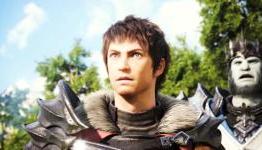 A Realm Reborn: Bringing Back That MMO Itch

The only Massively Multiplayer Online Role Playing Game (MMO or MMORPG for short) that Thirty & Nerdy.com's Matt ever sunk his teeth into is World of Warcraft. Mind you, this is back when the Leroy Jenkins video had first gone viral, not many people knew about Pandora Radio, and the Litch King expansion hadn’t even come out. When the topic of MMO comes up he often tells other gamers, “I lost a year of my life to WoW before quitting cold turkey,” to which they usually respond, “Only one year?” Why then is he so keen on the idea of Final Fantasy XIV: A Realm Reborn?

Anyone play FFXI or have high hopes that this time FFXIV turns out great?

Played XI and I know it's not going to be the same 1:1 copy but I'm hoping this time around in ARR that it will give me plenty of hours.

Gotcha, cool to know that people like yourself are going to give it a second chance. =)

Psyched for it. Been a beta tester and player during the awful 1.0, canceled Jan. 5, 2012, as I couldn't see paying to play it in it's previous form.

Been playing FFXI since PS2 NA launch, quit right before Seekers of Adoulin launched, really hoping this has the same "feel" as FFXI.

Got a cream for that itch before I ever got one...

Haha, what sort of prescription?

I think there are a lot of gamers that would play a good mmo on a console. This could do well. It looks awesome. I have been following it closely and I may give it a try. My biggest fear is that I have a highly addictive personality and I don't want to get too hooked.

That might do the thing, Final Fantasy is actually one of the only franchises that have even bothered trying to fill that role in the console market. So it might be a new experience for some people, and FF14 does look pretty polished, but if you're an old PC gamer who's played a few on the PC you might not be so enamored.

The idea of a massively multiplayer game still interests me, but the market has become massively single player games. They've focused on making it easier to do all the content by yourself and I think it degrades the experience. Instant matchmaking seems to remove a certain interaction, and much of what I've seen is that players don't even talk to each other anymore.

I've come to hate logging into a MMO for the first time and seeing that ! above an npcs head. These things turned into theme parks where they hold your hand as you walk around the entire world doing quests, and it's flipping boring. What sort of exploration and adventure is that?

I really cant wait for this game to release, cant wait to find out more info on the new summoner job.

Can't wait for it. Pre-ordered both pc + ps3 and have 1.0 CE + Legacy status. Awesome game. Beta is great too. You should definitely give this a try!

Is this closer to FFXI than it was to the failed version they released? I ask because I did not like the game they put out with FFIV

It's not really that similar to FFXI. You'll recognize a lot of the monsters and you can level different classes on the same character, but other than that it plays very similar to the stereotypical MMOs that come out nowadays. It would have been a lot better if they copied Tera's combat tho.

I check all 3 of my email accounts waiting for a beta code . I personally love MMo's , played ff11 for 3 years and been playing dcuo on ps3 since release to buy the time while waiting for ff14 .. Go big or go home .

Will there still be a beta for the ps3 crowd? Man, I can't wait to immersed in an rich mmorpg again - it has been too long! :)

Glad to hear. Looking foward for it!