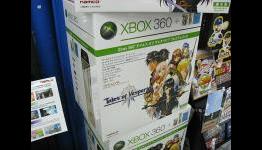 By comparison, the hardware sold 485 units the week prior.

Microsoft in Apr. said the Entertainment and Devices division generated $2.53 billion in the third quarter, a 56 percent increase from 2012.

How can it die when it never lived?

xbox is the payless of game consoles there

They keep the cardboard boxes for organize shoes....

Huh,Japan is not right place for x360

I know right. MS will do better this gen as we all know Japan cant get enough fantasy football and halo.

This is why MS should exit Japan and quit wasting money there its not worth it.
They could use that money and invest it in other projects and markets.
I dont expect any huge sales for any console the country is in a 3 digit recession and the japanese economy is shrinking.

i wonder, which number below ONE?

I'm a PS gamer, Microsoft are seen as uncool in Japan, every one knows Xbox does not do well in that territory...even Elvis Presley, Tupac, Biggie and Brucey Lee knows Xbox sucks in Japan....old old news....pffft!

**If MS swallowed some pride and 'LICENSED' Xbox to Panasonic, JVC or even Korean owned Samsung...they could have a logo 'Powered by Xbox Live Japan' and make the X1 smaller, more curvy, then maybe, just maybe, Xbox can find a place in the Japanese market place.

Apple products are very very popular in Japan, so the 'American' product excuses are redundant

I have no evidence to back up this claim but can someone tell me if the dreamcast sold more than the xbox 360 before it was discontinued in 2006 in Japan.

How do they expect to sell 1 billion units if they can't even hit 400 in Japan? They got to pass some of that good stuff.

No real surprise. It's been dead for a while.

Who cares, It's doing fine in the rest of the world.

Rest of world meaning America...actually I believe PS3 is dominating in America as well as the rest of the world.

TBH I don't know who has sold more in America, Europe or the world and I couldn't care less as I don't make a dime on any system sold.

AND to clarify I said the 360 is doing fine in the rest of the world MEANING (according to the article) it's generated $2.53 billion in the third quarter, a 56 percent increase from 2012 as well as the Xbox Live division currently holds 48 million members.

Those numbers are nothing to sneeze at hence It's doing fine in the rest of the world.

Why some people feel they need to champion "Their" system is beyond me, I have access to all the current gaming system because I enjoy playing games.

Be a Gamer not a hater.

This is news? I am sure that both Sony and Nintendo outsold 360 in Japan every week since they were released.

And it has been common knowledge that xbox does not share its north American and uk popularity in Japan...

Really people, this kind of news is desperate gutter material...

I thought japan was abandoned years ago