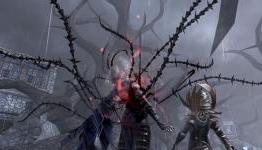 "It’s not often that a first-party PS Vita title makes an appearance since the system’s launch in early 2012. The handheld has been almost begging for a killer title (at least in the West) and, unless you’re an avid Japan importer, your game library is looking lonely. So here we have Soul Sacrifice, a creation spawned from the mind of Keiji Inafune who co-designed Mega Man. Mixing the successful monster hunting formula with a dark narrative and macabre art design, is this a much-needed system-seller?"

First-party Vita games discounted by at least half off