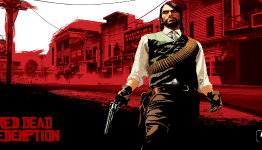 Red Dead Redemption is my game of the generation. What is yours?

Adhttps://store.steampowered.com/app/1488200/Symphony_of_War_The_Nephilim_Saga/?utm_source=n4g&utm_medium=native&utm_campaign=sow_n4g_native&utm_content=png
- Comments (106)+ Comments (106)
TopNewestOldest
Expand all
The story is too old to be commented.

Heavy Rain is exactly what i was about to post

Yup, Heavy Rain is the first thing that came to mind for me as well.

For me, it's either that, Dragon Age Origins, MGS4 or GT5 which will be replaced with a 6 later in the year since it's the same game just better in every way.

We still got some BIG'UNS to come too!!

I've been saying this for quite a long time now, but I think this was the best generation of gaming. The amount of good quality games with great features this gen has been a never ending stream it seems like. People on the internet with an opinion seem to badmouth this generation of gaming in every way possible, but imo that's just because everyone now has to be a cynic. It makes them feel "cool".....or sometimes it's for worse reasons, not loyalty for their own brand, but hate for any other.

The Only game this Gen I spent over 60hrs playing and enjoyed every minute of it:-)

yea stalker scared the crap out of me, definitely deserves recognition.

The title asked a question so people will reply in the comment section with their answer. I just don't see why people will disagree with what other people claim as their favorite game this generation as if they know they're lying.

Demon Souls. NOT to be confused with dark souls. They ruined the online indark souls amongst other things. Demon Souls was Epic. Invasions left and right. The intensity. Everything. I feel for people that only played dark souls.

MGS4 for me is the best game of all time. That game just invoked so many emotions within me :')

Yup. I actually cried at the end. When Sunny asked him why Snake hadn't appeared at the wedding the Colonel said something along the lines of: "Snake needs some time rest. He had a hard life.
Thank you...Snake.."
That coming from him right after the scene where Snake supposedly shot himself just made the tears flow :'( ..
It was, next to FFX, the only game to ever make me cry.

I don't have 1 game that did it for me. There are probably 20 I could list that had an awesome positive impact on how I view games and they all made me appreciate games even more.

A lot of those are "catch up" games I've been playing via 3DS/DS/psp/...games I missed out on.

This gen for consoles was the most generic yet. It offered good games but not that many that really stood out and did nearly everything right.

There are also the games that are good that I haven't played or may never play because I'm not into them.....I can still recognize their impact on gaming though.

Tough question to be honest. RDR is definately up there as are MGS4 and Uncharted 2. I'm going to go for something odd though. Ratchet and Clank: Tools of Destruction. I had so much fun with it consistently throughout the generation. I just kept going back to it.

I would ALMOST agree with Tools of Destruction. The game really was so good. But unfortunately it's one disappointment was SO major that it just doesn't even come to mind. That is that the online in the last PS2 Ratchets were so great and so much fun, that Tools not having a similar online caused me to even cancel my pre-order.

Toold of Destruction with like...Full Frontal Assault's online would have been my dream R&C game.

Valkyria Chronicles without question for me.

STILL haven´t unwrapped my VC... Kinda waiting for a trophies patch or something. Never really fell for the demo although I played it 3 times over the years... Ugh!

I don't think there will ever be a trophy patch for this game. I also think he lack of trophies added to it being my favorite game. I played and enjoyed it just for the game itself and it was the game this gen that I really felt a deep attachment to the characters and really cared what happened to them.

The demo doesn't do the game justice imho.

I don´t think there will be a trophy patch either, but nowadays I feel like i´m wasting my time when i´m playing a game without trophies. I need to get those stamps of approval in a weird psychological way...

Come on, really? I think the game being really good added it to being your favorite game, not the lack of trophies...

between heavy rain and fahrenheit

RDR for me too. Spent tons of time playing that masterpiece. Bioshock a close second

Hard.
New Vegas, if the amount of time played is to be believed. Game still hasn't gotten old for me.

I would say RDR because for me I have never finished an open world game, but I did for RDR, in fact I dont partically like open world. Uncharted 2 was awesome though, plus flower and journey and Heavy Rain, in fact I changed my mind Heavy Rain it is.

Bioshock 1 for me, first to come to mind anyways.

Binary Domain for me.

Fallout 3, Uncharted 2, Infamous and Demons Souls all get mentions but when someone asks 'Whats the best game you've played recently' I automatically think Binary Domain.

Honestly I was a ms fanboy until I saw naughty dog put the ps3 through it's paces. That part where you're being stalked by the tank and the tank is turning everything around you to dust...
y.
That was just *\0/* so beautiful, so immersive, that I didn't know whether to stop and take pictures or try and record that ish.

Uncharted 2 because it blew me away and redefined a genre.

Dark souls, the witcher 2, or dragon age origins for me

RDR is also my game of this gen.

there was way too many games to pick just one. from bioshock to gears to uncharted to Mario galaxy. rdr is a very good choice though. that may be the most memorable for me so i'd have to agree. rdr best all around of last gen. (followed closely by just dance and Kinect star wars/s)

InFamous 2. Such a great game :D

Personnaly I prefered Infamous 1 a lot more than Infamous 2.

RDR & Halo 3, no other games kept me coming back so often.

Right now... Uncharted, all three of them. Not counting Vita because I haven't played it.

Gears of War.. it epitomizes everything what a next gen title should be. To this day I've yet to find a game this gen as addictive as the original gears.

Special mention for Call of Duty 4 too.. love it or hate it, it redefined the FPS genre.

Ok, I just can't choose only one. Too many good games this gen. I haven't played the Witcher games yet, but certainly will.

Uncharted 2 is the best game of the generation. It's sad because after that Naughty Dog lost what made them good apparently. Uncharted 3 was just "ok" and The Last of Us looks like garbage (but I think this is because they hired some new team to make it).

You're probably the first person in the world to say this. I couldn't disagree more.

My favourites are the Mass Effect Trilogy, Team Fortress 2, Borderlands 2 and of course Half-Life 2. There are many more worthy the title, but personally those three are very close.

It may seem like the safe answer but, while I think RDR is a superior game in many ways, for AAA titles, I have to go with GTA IV. Yes, by the time it came out, Saints Row was already around and the whole sandbox thing seemed done to death. GTA IV not only added a new level of detail never seen since, but was also one of the first games to add DLC content that was MASSIVE - The Lost & Damned and Ballad of Gay Tony, like them or not, felt like sequels set in the same universe (they essentially were, really) as opposed to just add-on features. While I'd do the same with RDR, I can see myself still popping in GTA IV not just during this next gen but the ones following that.

If you're talking about download only PSN/XBLA games, I'd have to give it to tie between Geometry Wars 2 and Braid. GW2 was the first download only game I played that I got excited about and, for the first time in a long time, I got into heated competitions with my friends over high scores. Braid, on the other hand, while it frustrates the ever-loving crap out of me, showed how innovative and beautiful an independent game can be, paving the way for Limbo and some of the other amazing titles coming out of indie studios today,

I hope not to get too much disagrees, but, the DS count as "this gen"? My prefered game was (and still is) The World Ends With You.

I'm sure I played better games this gen, I have the fondest memories of Fable II. So Fable II for me.

Mass effect series followed by half life 2 and portal 2. All these titles are just dripping with quality

THE LAST OF US SUCKAS!

Your game of the generation is a game you haven't even played? STFU

I didn't expect anyone to take that comment seriously but apparently you did.

there are too many amazing games this gen for me to choose just one.

Mine was Red Dead Redemption too

RDR for me too.

And what's with all the disagrees in everyone's posts?

Uncharted2 would be overall pick as it's appealing to both casual and core gamers aswell as it's fun and not complex
but i would personally pick MGS4
my top 10 from the games that i have played are:
1-MGS4/2-RDR/3-Dark Souls/4-Fallout3/5-MW/6-GOWIII /7-Killzone2/8-Infamous/9-Deus Es HR/10-Catherine

Killzone 2 and Battlefield 3 only the multiplayer. The ISA story sucks!

well the generation isnt over yet so let see how TLOU and GTAV does.