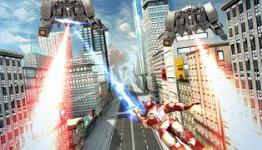 Before Disney purchased Marvel for $4 billion in May 2012, Sega had released console and PC games based on the first two Iron Man movies. With Iron Man 3 blowing away box office records (over $175.3 million domestic for a total of $680.1 million worldwide) in under two weeks, there’s only a free mobile game from Gameloft for gamers.

Disney has failed to capitalize on Marvel video games in the console space, sitting out Marvel’s The Avengers last summer (Ubisoft had a non-movie Avengers: Battle for Earth comic-based game out last fall for Xbox 360 Kinect and Wii U). Disney has had success with the free-to-play Facebook game, Marvel Avengers Alliance from Playdom, and there’s always the potential for an Avengers game tied into the upcoming Avengers 2 movie.

Adhttps://www.youtube.com/watch?v=R7HhyEZ2HRo
- Comments (25)+ Comments (25)
TopNewestOldest
Expand all
The story is too old to be commented.

I'd love to see a quality Avengers or Iron Man game.

Just make it more like the first one though.

I thought the 2nd one was the worst of the bunch, out of the X-Men Legends / MUA games

Yea, man. Same goes for The Dark Knight Rises too. Huge movie, but game was only available on mobile devices. Although Avatar had a game out, but it under-performed in terms of sales...

Batman Begins had a tie-in game. Wasn't that bad AFAIR.

"Disney has failed to capitalize on Marvel video games in the console space, sitting out Marvel’s The Avengers last summer"

And they were right to . Everyone needs to stop releasing movie games adaptations , the only time they are decent is when they set out to transform a game already under development (like what happens with wolverine and Spiderman 2) or when it's done regardless of a movie's release date .

And before disney pursue Marvel stuff they need to hire or build good enough studios .

Not to mention getting some rights back from the filthy hands of activision .

Ironman 2 was a decent game by Sega I thought, much better than the first one anyway.

Wolverine Origins was a fun game

Thats because it was an original IP before it was forced into a movie game. See how the game was violent. It would of been so much better had it stayed a stand alone story.

Because a movie cant be successful without a video game, right?

That's what I was getting out of this, and which doesn't make sense.

Frankly, I'm glad they didn't pump out some subpar tie-in just to make a quick buck.

I want a new Ultimate Alliance.

Wow. Their goal for the US was $160 million and they surpased it...damn.

That number will sink faster than the first two films.

Idk about that man. This movie has 100% less Mickey Rourke...

Have you seen Iron Man 3? Ugh.

I don't know about the author or any of you guys, but I count my blessings any time there *isn't* a movie based game. Batman Arkham is so good because it wasn't given a quick deadline to cash in on a movie. The most recent Transformers games were surprisingly good because they were handled with care, in respects to G1. I'll take my chances with an original game based on canon than a movie tie in any day.

I want a sequel to Marvel Nemesis: Rise of The Imperfects.

i thought i was the only one who liked the game. sure a bunch of the characters were no-names but it was fun!

on a side note, iron man 3 as a film was a piece of crap

I've actually seen the film yesterday. I'm not going to say it sucks. It's a good film, but a really disappointing one at the same time. You'll know what I mean when you see it.

The movie trailers for it was all false advertising.

I thought it was perfect. It was a hell of a lot better than the second one. Also, an artist was at the theater and was drawing and handing out marvel characters for free. Got me a nice Iron Man drawing :)

Whats the point here? That developers aren't able to make good console games based on movies so they resort to cheap throw-away iOS games?

Agree 0Disagree 0
▼✖-+
SPAMInappropriate
Show all comments (25)
The story is too old to be commented.
70°

Azerion And Ubisoft Expand Their Partnership

Aleph.im partners with Ubisoft to bring playable NFTs to AAA games for the first time

Ubisoft’s head of global game production is leaving the company

What Were They Thinking: December Edition (The Gaming Review)