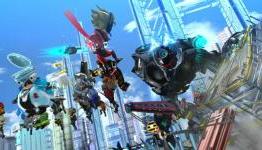 Platinum's Hideki Kamiya Probably Fooled Us About The Wonderful 101

Apparently, we fell for a classic Hideki Kamiya troll. We're still waiting to hear back from Nintendo, but the chance of The Wonderful 101 coming to the United States next week? Pretty slim. You win this round, Kamiya.

Wait, that was a rumor? I never heard about that. But, I can't wait to play this game. It looks pretty awesome. But who would really think that the game was coming out next week? Would anyone expect them to release a game a week after announcing the date?