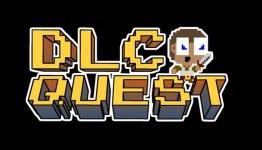 GIZORAMA - DLC Quest originally released as an Indie game on the Xbox 360 in November 2011 and even won the Official Xbox Magazine Indie Game of 2011, but that’s old news as DLC Quest is finally available through Steam! Going Loud Studios tells us a story of a future where game companies nickle and dime gamers with downloadable content for features that used to be part of the core game. The game is actually a commentary of the gaming industry presented through the gameplay of a light on action platformer. The Steam release features the original game and its expansion, Live Freemium or Die, which furthers satire beyond DLC to other gaming industry day faux pas like day-one patches and season passes.

DLC Quest is best described as a satirization of the excessive monetization of gaming. The tongue-in-cheek style is matched with a simple game that represents a level of innocence that fits a bygone era of gaming. Underneath the surface is a thoughtful commentary on the bottom of the slippery slope and while things might not ever get that bad, we have to recognize it to prevent it. It is easy to see a world where core features are held for ransom when even today we are seeing the evils of on disc DLC and simple palette swaps sold as extra costumes.