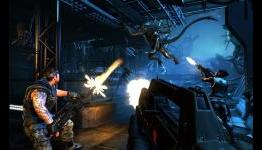 SEGA Still Not Talking About Aliens: Colonial Marines On Wii U

Aliens: Colonial Marines is one of those games that may never see the light of day on the Wii U — many of you may not be bothered at this stage about its status, but it's still a pity nonetheless.

Honestly, I think the Wii U got lucky missing out on this one.

as far as I know the game was damn near complete on the Wii U. I guess they figure cutting their losses instead of hoping to sell X number of copies to make their money back.

Shame though, I am sure with all the complaints from the 360 and PS3 versions they could have taken this extra delay time to tweak the game a little to improve on some of the others' shortcomings.

Randy Pitchford was right afterall! The Wii U got the definitive version of Aliens.... NO VERSION!

I guess nothing is better than crap, shame because I was looking forward to this game when it was announced..

Wow Sega is so lazy, it is still listed on their website for Wii U. I was looking forward to this game. Looks like its a no go. Unless they do what Team Ninja did with Ninja Gaiden 3 and revamp the game to make it play like it should. I only rented this for PS3 and it was pretty much a stinker. This goes into one of my all time let downs like RE6.