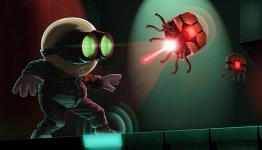 Hello! I am utterly overjoyed to bring you news that Stealth B**tard, our outrageously devious stealth-puzzle-platformer, will be sneaking its way on to PS3 and PS Vita this Summer!

Great game on steam. Highly recommend anyone checking it out.

Vita a platform for Indie games

Considering that most of the innovation in this industry comes from Indies, and that many of the best games in recent years have been Indies, I'd say that's a very good thing.

Meanwhile, on the AAA front...
*insert picture of ghost town and tumbleweeds*

Keep in mind we're 8 weeks away from E3

Soul Sacrifice has already been released and it was the first "big" game in months.
Dragons Crown is on PS3, PSO2 is on PC.
Killzone might be decent, we'll see, but 4 on 4 MP was a bummer, dunno why even an in-house studio can't push past that.
Tearaway looks cool and has the merit of looking very Vita-centric but it's more like an indy.

As for the PS3 games, never said the PS3 had a shortage of AAA exclusives. It has plenty and I have no problem admitting that.

Meanwhile, on the trolling front...

This will go well with the vita.

What a perfect fit for the Vita. I'll pick this one up day 1. Does anyone know if the DLC will be included?

Of course the Indie train won't stop. They have so many potentially successful innovative games to offer. For the people who complained in the past that the Vita has no games, you can stfu now.

its unstoppable, and it cant be derailed... ^_^

Theres also a contest to change the name of the game be less profane. If your name gets picked, you get a free vita and the new game :D Good luck to anyone whos joining!

I’m as shocked as you, but Dead Island 2 is one of the best-looking games I’ve played this year

Inside Dead Space™ #1: Remaking a Classic