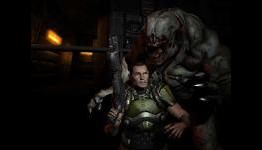 "You’re walking down a cold, dark hallway where the metallic walls are caked with rust and long strands of water drip from the ceiling. You are encapsulated in an oppressive ocean of shadow, armed with only a flashlight whose battery is waning and a revolver with only two bullets. As you turn each corner, a feeling of dread clings on to you as you frantically scan the environment with your eyes. Then you hear a shrill noise; a scream, possibly. Gulping, you turn the next corner.

Suddenly, before even completing said turn, you find yourself locked into place, unable to move. Then your eyesight seemingly exits your head and proceeds to hover over to the end of the hallway, where an alien egg lays. The egg slowly peels away to reveal an alien beast, who slowly grows an extremely obvious red weak point on his chest on proceeds to swipe at the air and scream at nobody in particular. It is at this point that he looks in your direction and starts walking over to you.

Then and only then does your eyesight come back to your head. Having memorized the layout of the hallway, where the beast is standing, and where his weakpoint is, you quickly aim at his chest and shoot it with your revolver. He is now dead, and your face is a fusion of blankness, bewilderment and unsatisfaction.

Chances are you’ve witnessed a scenario like the one I just described. It’s when the first enemy of certain type is introduced via a prolonged cutscene that interrupts gameplay and takes away control from you, the player. And I can’t be the only one who’s annoyed by it." (Michael Urban, OnlySP.com)

"Chances are you’ve witnessed a scenario like the one I just described. It’s when the first enemy of certain type is introduced via a prolonged cutscene that interrupts gameplay and takes away control from you, the player. And I can’t be the only one who’s annoyed by it."

I'm not annoyed by it.

true... but i bet if you are at a point where a new difficult enenmy is introduced, and that cut scene cant be skipped... it gets annoying, like on metal gear rising, if you play on revengence difficulty, your going to have that happen to you more often than not

If the cutscene immediately follows a checkpoint and for whatever reason you keep dying and having to watch it again, I agree that's annoying. You should be able to skip it after you've seen it once.

I agree, it really takes you out of the game, and decreases the tension when it spends 2 minutes to show off what the boss looks like. It does pull me out of a game most the time.

I disagree. Cutscenes can make a scene emotional through camera angles which cant be accomplished during gameplay. They can make something look cooler than it actually is and I'm in favour of that...

But if the cutscene has one of those "gamey" lines like "maybe we should shoot it in the head" to make you think "yeh they're telling me to shoot it in the head to kill it" then I'm completely against it. For once could they let us figure out how to kill the boss on our own?

Cutscenes are a perfect way to introduce enemies. Resident evil 1 through 3 did such an excellent job and so does metal gear solid. Whoever wrote this article probably started gaming this generation.

Or like myself they started gaming before even you did. Because back in the day, of NES/SNES/Early PC days you did not have cinematic like that.

Now sometimes they worked just fine, but a lot of times they did not.

People seem to confuse and think the cheap cinematic crap most games pull is some how good. Most of them feel like a C-Class movie trying to be something more. Be a game, they need to evolve the way game stories go and not try to copy Hollywood.

Check out ninja gaiden for nes and tell me they didn't have cut scenes. I started back in the nes days myself.

I 100% agree. Most games are too predictable, and whats with the glowing weak points? I thought that crap from Japanese games should have died in the 90's. The last game that truly made me jump was the first Dead Space when the tentacle first shot out and grabbed you. It was totally without warning. I love that kind of stuff.

I like when new enemies are introduced via cutscenes

So what does exactly need to happen then? It seems that this has been a staple of gaming for a very long time. People are also unhappy with QTEs as if they actually ruin the gameplay experience..

I suppose they could look for more innovative methods to introduce enemy bosses to you but I still see it as an entertaining way of breaking the ice with each new boss/enemy that you come across.

I will say some are done way better than others..

but that being said I love the QTEs, and enemy intros in most games.. especially GOW.. however, I wouldn't mind seeing it evolved into something better.. I am all for that. Peace

RE 2 licker yo, it was awesome and you first see it crawl across the window and are thinking what the hell was that. Then you see this ugly thing above you in the cut scene. Although, I guess cut scenes were bad ass back in the ps1 days.

Flame bait article marty. These clowns need to go back the past if you know what I mean

A nine minute cut scene detailing a generic demon/alien hybrid that I beat in 11 seconds and never remember.
QTEs can extend this to 4 minutes,11 seconds.

Allusions of the Future: A Half-Life² Retrospective