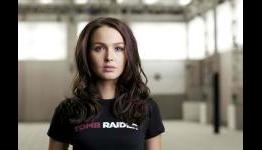 You Could Most Likely Beat The Real Lara Croft, Camilla Luddington, In Tomb Raider

Camilla Luddington, who currently stars in Grey’s Anatomy but who you’ve also seen a lot of in Californication and True Blood, is a fun person to interview. I’ve actually interviewed the actress twice, once at San Diego Comic-Con last year and again recently on the eve of the official launch of Tomb Raider. Luddington, who provided the voice, facial expressions and performance capture for the new Lara Croft, takes her game seriously.

Adhttps://www.youtube.com/watch?v=_iUAHlmkvuE&feature=youtu.be
- Comments (20)+ Comments (20)
TopNewestOldest
Expand all
The story is too old to be commented.

Also she is able to form her thoughts into coherent sentences, so that's sort of icing on the cake.

She's such a nice and charming actress, and I thought her voice acting in the game was really good. I was shocked to hear that some people didn't like it. To me, she could definately star as Lara Croft in the movies as well.

I am very impressed with her performance in Tomb Raider.

Whats with people these days always wanting a HOT gamer chick to play games with??? Of course she's going to suck.. She's just a voice actor, who probably NEVER plays games unlike us hardcore gamers' playing games like there is no tomorrow.

Because you do voice over you automatically suck at games?

Rhianna Pratchett on another game.

I hope she writes good dialog like this for The Watch TV series.

She did a fantastic job as Lara. She is so dedicated and I'm really hoping that Crystal Dynamics would continue on with this new look for Tomb Raider. It really is one of the best games of 2013.

She's pretty hot, she was in californication!