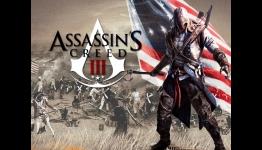 David Ko of GoozerNation writes, "I’d love for a sequel to show the aftermath of the Revolution and I have some ideas on how those missions might play out. In the last quarter of the game, Connor seems to have broken ties not only with the US government, but also with Assassin orthodoxy. He’s willing to at least consider Templar ideas of order, or at least the possibility that the US won’t fully embrace Assassin ideas of freedom. The history of the United States is the history of compromise. It makes sense, then, that Connor would work to navigate between the extremes of Templar control and Assassin freedom. Here are the Assassin's Creed missions I'd like to play in a sequel."

...I'd like to see a sequel that actual covers the revolutionary war.

I mean, AC3 hyped up all the big battles and the revolutionary war setting... but all we really got to see was one big battle, and two very small ones from the very beginning of the war. Huge let-down.

What video games get wrong about horses