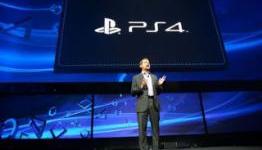 Why You Should Get a PS4....Eventually

As we gamers prepare to offer more overpriced hardware into our living rooms to go along side our DVR’s, Apple TVs, and Surround Sound Bars, we have to consider certain things. What is it that we want out of our gaming experience? The console wars took a twist in 2006 win the Wii was released. It wasn’t the first time a console manufacturer made an attempt to include “non-gamers” in the discussion. But it was the first time you got bored housewives, seniors, and anyone who wasn’t a male aged 15-35 involved in the gaming experience. This would lead to Microsoft’s Kinect add on for the Xbox 360 and Playstation’s Move controller. All of these devices scream “conventional gamer you are not enough”. The equivalent would be when you’re favorite rapper starts making “swag rap”. Call it the “Drake-iziation” of gaming.

Note: the title says eventually because the PS4 isn't in stores yet

well if they stick to fps only games i'll stick with my ps3 7 years is enough for action shooter,first person shooter, online multiplayer shooter only games.

something fresh an new not shooters is wanted these days.
@classic
did not say sony made those games you mention all im saying: new ip's besides first person shooters need to be made for ALL games young and old to possibly buy ps4. what sony has to offer now not looking to good.

@ DEEP FRIED
im not complaining i want more than those shooters like when sony had vareity of games and you did notice first person shooters sony had what you like back in 80's 90's
ok' this a new generation of gamers but i still like the days of vareity beat'em up/platform/space shooter games that is what missing this generation. to much blood spilling games.

Sony does not stick to FPS, unless you think sony made crysis, cod, the darkness, battlefield, rage, borderlands, far cry 3 and so on.

are you even planning to buy beyond two souls, ni no kuni and the last of us?

Perhaps you should play some of the many games that aren't shooters. If you're complaining about everything being shooters then you are probably only paying attention to the shooters.

...So basically they're just focusing on FPS's?

Did we watch the same conference for the PS4?

Uhhh, did you watch the conference?

Knack, Witness, Deepdown, DriveClub? None of those are FPS games.

Classic we all know Sony didn't make crisis or cod but you need to know they didn't make Ni No Kuni or Beyond Two Souls. Both are from third parties. Your using third party games as examples of Sonys first party diversity. Uncharted, Infamous, Resistance, The Last of Us, Killzone, Socom, Unit 13 are all shooters. They mainly make shooters and realistic games these says

You Sony fans really don't know wtf your talking about. Every game on past is a Sony game and every game on 360 is third party right? Thank goodness Sony developed Ni No Kuni, Valkyrie Chronicles, Heavy Rain, Takes of Graces and all their other diverse catalog. Hypocrite.

Infamous, Last of Us and Uncharted are NOT shooters. You seem to be the one who doesn't know what they're talking about. All I heard from you was 'blah, blah, I hate Sony blah'.

I am getting the PS4 because its a core gaming system. I feel like i am the main person they are trying to please.

Microsoft better balance there kinect stuff with core games and then I will be interested in the next box.

I am getting the PS4 because its a gaming system. I like all aspects of this industry and have been there since the beginning.

I have learned to appreciate the good with the bad and can ascertain my own personal expectations.

Anyone who has been around as long as me can understand that the industry has grown bigger than it was when we were younger. bigger than the 'you' or the 'me' in the world.

Especially big enough to sustain the diverse demographic of what makes up the gamers of today.

Why you should get a PS4 quickly:

Because judging by the ps3 console models, the launch version will be the best version

Bubble++ for that! Had to laugh even though it's a sad thing.

Plus mine is still going. I've been lucky and never had to buy another Sony console.

I'm getting one for the games.

I wait with every new console. Give it a year or so, wait for more games to be released, fix any problems with the console itself and for the price to drop.

I respect your position, but I personally cant miss a year of gaming to save a couple hundred dollars. Its not like after a year I'm going to have that extra money in my wallet.

Miss a year of gaming on a console I want now.

I get that people that will want to purchase in the release window. The thrill of new tech is an allure many cannot resist. But I hardly think you're missing a year of gaming.

The way I see it, the launch titles rarely show the true potential of the new console and games released with the console can be hit or miss.

And if you only play Sony consoles, then the PS3 has hardly been forgotten about as there are still a good few years left in it's life-cycle, so Sony will continue to support it. If you play other consoles you'll still have games to play there and if you own a gaming PC as well.

Or you could simply view that time to catch up on games you missed, ones you will be now able to pick up at bargain prices. Games I've yet to play are Mass Effect 3 and Uncharted 3, think about the prices I can now get them for. It never hurts to wait.

But yeah, just my thoughts on it really.

I'm looking forward to getting a Ps4

Probably not day one, but I'm getting a PS4 as soon as Infamous: Second Son comes out, as well as a Motorstorm game.

What, a positive article about the PS4 submitted by Strongman? No way!

Show all comments (33)
The story is too old to be commented.
20°Fresh