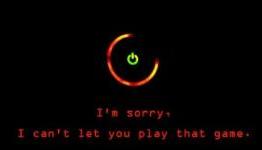 Xbox 720 to use always-on DRM? It would doom the console

Rumors have recently resurfaced that the next Xbox will employ DRM that requires you to be online before you can access your games, whether it be for the purpose offline play or not. If true, it seems Microsoft would be releasing its next flagship piece of hardware with an install base of angry users, perhaps dooming the console from its beginning.

Why am I not surprised?

4 negative submissions regarding the next-gen xbox within 10 minutes??

oh wait...it's strongman..
only he can have so much free time to endlessly push your anti-xbox crusade.

It's fear and anxiety. You can just tell from the tone of his comments how afraid he is (and many other are) that the new Xbox might be as good (or better) than the PS4. So, he has to start a pre-emptive trolling and hate campaign.

ROFL... @Strongman you should be ashamed. DOOOOOOMED... LOL... clown.

Why is he still on this site? I know people have had to report him like I have, but he always seems to come back and post more and more.

I'm of the opinion that he's one of the main things wrong with this site, not him alone, but the fact that he'll get more agrees than disagrees when obviously trolling is just wrong.

Anyway, these are the same rumors that plagued the PS4 and they turned out to be false, DRM doesn't work, and Microsoft has to know not everyone uses online, of the 76+ million Xbox 360's sold, only 46 million are online. Doubt they'd be willing to take a 30+ million consumer loss just to try and force people online at all times.

Every console has had it's fair share of doom and gloom. It's just this site and the "Sony fanboys" who elevate it and believe that it's all there is. And why shouldn't they, they stick to their own articles and that's all they think they see.

Sorry mate but PS3 has world record in numbers of Doom/gloom articles. 360 had some but not like the PS3.

Sorry but i think strongman is very reputable.

Probably because you are him....lol

What is up with the mods...Strong man mocks them with his multiple accounts and constant trolling on 360 articles and they just let him roam free on N4G and also give him an extra bubble.

Also how can the mods allow him to post that RROD pic? if this was Something about Sony the mods would ban me or tell me to change my story pic.

This site is infested with pro PLAYSTATOION people and its sad to see the mods let this site get like this.

I'm sorry my friends but it's not just the fanboys it's the mods itself that are pro-sony.I have been banned several times because I have asked about them getting paid by Sony.

I highly doubt MS would do this. 1) not everyone has a internet cnnection to be online. 2) sony already has a patent for it. I dont see ms wanting to pay sony to use this. I can see sony doing this more then anyone. Since they been wanting to implement this for years now.

Alright you're cleared Hot, prepare for take off. Give my regards to the front page

Don't worry ichimaru I give them ur regards

another Microsoft is DOOM article submitted by Strongman? Didn't he submitted another one earlier like 2 minutes ago?

What have Microsoft ever done to you??? If you put all that effort and dedication into something like finding a cure for cancer rather than these Doom Microsoft articles, the world might be a better place.

the flame articles will never stop sadly... even tough i play on ps3, i might pick up xbox if it's good.

You use the same account on the Vita, so why would they change it with PS4?

That's why I still play Intellivision

consoles are drm, but besides that microsoft got away with alot last gen somehow. Sony should have killed them off, but somehow the xbox brand is strong.

Better MS hears how much everyone hates it so that they change it. You might not like seeing this articles but it'll only lead to making a better console in the long run.

"You might not like seeing this articles but it'll only lead to making a better console in the long run."

lol at you even believing something so ridiculous.

Not saying it's real or fake. Just best to be vocal rather than ignoring it.

Instead of playing Killzone, or Twisted Metal, or Sly Cooper, or God of War, and so on, Strongman is submitting doom articles.

All 720 games are FREE TO PLAY! You just have incentives to make hundreds of micro transactions within the games and pay for Live access.

1 - Consumer buys console
2 - Consumer buys Live subscription
3 - *Free* games downloaded by everyone, essentially putting a game in every Live-connected user's home
4 - People who never would have bought the game, might at least be tempted to make a few micro transactions
5 - People who would have gotten the game anyway, will make dozens or even hundreds of tiny purchases adding up to more than what a 60.00 dollar game would be worth at retail.
6 - Eliminates used games sales for those who download, because there is nothing to sell and no way to trade micro transaction purchases apart from selling your account info to somebody else and possibly the console they are registered to.

If you guys remember all the rumours with PS4. Most of the was correct, and some was not
Always On DRM is the worst DRM ever, hope not its coming for Xbox Loop (X1080, Xbox Next, Xbox 8,) or what the name is gonna be.

Only way always on DRM would be remotely acceptable is if it was built in to only Downloadable versions of the game as a fail safe against piracy. They could require a constant connection to keep it more secure (its only way it 'might' work and not be too annoying). As if you have the connection to download a next gen game you're probably constantly online anyways plus you probably wouldn't be sharing your HDD with a friend (depending on way its made). Both are still a douche move but its technically possible while still not affecting retail disc versions.

On top of that it could be an alternate anti piracy option separate from the rumor of Watermarked discs (I thought about it a little after the big article that got closed). MS 'could' theoretically use it to screw the consumers but then they could also just have a watermarked disc that gets read to make it much harder for pirates to do what they do (especially as its supposed to be a proprietary BD so not 100% Blu-ray so they'd have to have a special burner on top of the discs). By simply registering it as an 'official' disc it could even still allow for rentals and game trades. Granted they could still use it to bind any disc to a particular console as well (or even an XBL ID if you want to be technical).

I'm not saying MS is that thorough or going to do it, but it is an option that isn't 'quite' as bad as all the rumors make out. Or rather its the lesser of two evils.

The problem with anti-piracy systems is they all end up being completely useless (pirates and hackers aren't stupid), alienate a portion that actually buys the merchandise, or ends up hurting the company that chooses to do it more than the pirates ever did.

Just saying there are ways to do at least some of the what the rumors are saying without completely screwing people out of their console gaming experience.

Unfortunately at least one of the rumors are likely to be true even if the implementation isn't exactly right.

Agree 0Disagree 0
▼✖-+
SPAMInappropriate
Show all comments (34)
The story is too old to be commented.
30°Fresh1

Mech Armada releases on Xbox One and Series X|S

How Call of Duty: Modern Warfare 2 and Warzone 2.0 Successfully Coexist