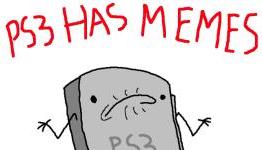 Thanks for All The Memes, PS3

Massive damage! Second jobs! Spider-Man font! Boy, I'll tell you what, the PlayStation 3 has been entertaining at times—and that's not even when the console's switched on. The PS3 has produced some of the best (and most loved) memes of this generation.

"According to Kutaragi, said the PS3 is "for consumers who think to themselves 'I will work more hours to buy one'. We want people to feel that they want it, irrespective of anything else." Anyone get a second job to pay for theirs?"

THIS has always bugged me. KK took a gamble on an expensive console and tries to raise PR morale in the original interview by bestowing confidence on the console's capabilities and the upcoming games. This obviously failed because of the GPU downgrade, the early dev tools and games not only having delays but not meeting expectations upon release. STILL, before all that happened, Joystiq took that small portion of the inter AND EQUATED IT INTO THIS:

Sir you are on 2 bubbles , keep preaching

I still use the "Massive Damage" one, usually on COD games when my bullets do nothing but one bullet from someone else does massive damage to me.

God I hate that type of lag, it really pisses me off- i think it might be worse than the jumping around the map type -_-

Oh I remember when Xbox fans kept saying no games. Funny how the tabled turned short after that.