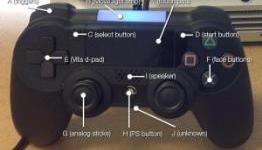 Could The New DualShock Controller Be The Heart Of The PS4?

Paul Kent writes on Sony-Gamer: 'In a recent article I wrote concerning what to expect from the Playstation Meeting, I suggested that the PS4 reveal may not be the biggest announcement. Of course, to a gamer, the PS4 would be the most important announcement, but I was talking in terms of an industry shaker and the repercussions thereafter. There was a section of that article that I decided to remove because it was speculative at best, but after giving it some thought, I’ve decided to write this modest piece dedicated entirely to the proposition in my headline.'

sony-gamer.com
If the Rumours Are True: The PlayStation 4 is Real - What to expect from Sony's reveal tonightel33tonline.comOliverKO

A bit off topic I know but I really hope the PS4 has its own custom music feature, it was the one thing I wanted this gen, Im kinda wondering maybe thats why theres a jack plug at the front of the controller, I duuno, just a guess

I'm not 100% sure about it, but I think you can already do so with certain games on the ps3 (GT5 I think) and with some games on the PS Vita as well. Again, I'm not sure, since this is a feature I've never needed.

On Topic,
I think the arcticle brings forth a very interesting concept with the controller. Using the controller as the main key to access all thing Sony/Gaikai would be another huge plus for Sony. But I think that even if they don't go that route with this controller, Sony manufactures enough devices (phones, TV's, Tablets) that would be able to access Gaikai in their own ways.

What I'm really hoping for to be honest is to see if they've bettered the Move controller with the sharpshooter, as I actually enjoy playing first person shooter games with it. I literally stopped buying FPS games that didn't support the move after playing KZ3 and R3 with the move. It made single player fun again, and provided a totally different approach in Multiplayer games.

theres plenty of games that feature custom soundtrack. the killzones and motorstorms and skate games for example

There are games right now that have this feature, but it's up to the developers to implement it, because Microsoft has a patent on the system default feature. People deny it for some reason, but I've read it myself on the patent website.

the remote looks awfull if thats the final looks. Wish they get off that look and do something similar to the wiiu second pad and 360. I think the screen is for selection of games already played that can be acess with gaikai, but who knows? I wait and see, only 3 more days. I get the feeling we are going to get a kick in the @ss.

Every Xbox game has it.. Not just some

I wouldn't expect to see that, if nit for anything else, then just because removable media would invite "obstacles" as far as account "borrowing" and hacking goes. It would also drive the cost further up.

And not to rain on this guys parade, but the rumor of your account tied to the controller has already been flying around for weeks.

The heart of the PS4 is Sony devs

They also lost studio Liverpool well shut them down but they did get sucker punch and the good thing is insomniacs will still keep making game life fuse witch will come out for both the xbox 360 and ps3 so I am happy that they will still make games for the ps3 as I grew up playing ratchet and clank on the ps2.

That'll be the most convenient choice for both Sony and Vita owners, and vita owners with a spare 4gb storage card... Win, win, win...

Probably not, knowing Sony. There was no reason for them to make (over priced) specific Vita memory cards in the first place but they did so I reckon they would do the same on PS4.

That would kill it if it did and I think they will just do the whole special hdd that the xbox 360 uses so if you want to upgrade then you switch.They mainly made the odd memory card thingy for the vita was to stop hackers as the psp was easily hacked and used for a lot of emulation.

hopefully the ps4 controller is done rite and supports COMFORT . . . . i understand the Vita is doing poorly in sales, but since when do sales determine somethings glory. The Vita needs comfort, it too is awkward to grasp . also systems need game-changing uniqueness . so far .EVERYTHING THE VITA DOES EVENTUALLY WOULD HAVE BEEN . NOTHING UNIQUE ABOUT THE VITA . shame

I have huge hands and I can say the Vita sits comfortably within them.
Not to sound like I disagree with what your saying, seeing that everyones fundamentals of comfort is completey different to the next person.

understood .. but . weather your hands are huge like mine or not, the vita gots them wrongly placed nintendo looking joy-sticks . if you get the comfort grips they built for the Vita, you will feel a huge difference in quality.
but them joy-sticks.

I just hope this is not the controller looks cheap.

This controller has horse droppins written all over it

Here is an Idea You Sony Geniuses, let gamers use the VITA as a controller.

Could be the heart of the Player...

That is a stupid idea in my opinion, most devices won't be able to play games like the PS4 will be able to. Do you really want to play ps4 games on a tablet with a ps4 controller? Its going to play horribly or the developers are going to have to hold back on games and make them less intensive, which is the opposite of what a next gen should do. Having your controller connected to your account is stupid too because its much easier to brake or steal than a console and what if you lend your controller to a friend?

I do like the idea except for that part which I'm worried about.

you know i keep hearing the controller looks aweful and so on but one im certain thats not the final version two i dont care what it looks like as long as its comfortable to use for many hours.

Manage a wartime airfield in Until the Last Plane

“WRC Generations” is now physically available for the Nintendo Switch