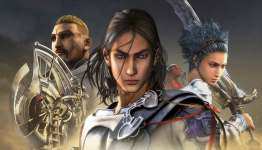 Jason Schreier: ''Let's make something clear. Japanese RPGs are not dead. They have never been dead. They will not be dead any time soon.

Allow me to prove my point. I've put together a list of ten JRPGs—all modern, all different, all excellent, all worth playing today. They represent every major console, Wii U aside, and they were all released within the past five years. All ten are worth your time.''

Wait a minute, wait a minute.... So Mario & Luigi gets in (not saying it's not a great, game, I had a lot of fun with it), but there's no mention of Xenoblade or Tales of Graces?

Exactly. It's just a list of 10; there are more out there. However, Lost Odyssey was far and away my favorite JRPG this gen. Xenoblade and Tales of Vesperia are tied for 2nd. (note: haven't played Ni No Kuni yet; that's next on my list)

i am glad i saw last story on a list of best JRPG'S but where is tales of graces and xneoblade? those games in my opinion are up there with last story for best JRPG this gen

It doesn't say "best." Not every feature has to be about the "best."

It's criminal how overlooked Nier is.

I wrote a FAQ/Guide for it and I still get people emailing me questions about it. So while it may not be talked about much, there does seem to be a steady stream of people 'discovering' it.

Given how few JRPGs there are, period, on PS3/360, it seems like it would be monumentally difficult for anyone to overlook any of them.

Though I suppose there -are- people who don't know Valkyria Chronicles or Disgaea exist.

Anyway, my own personal picks for "most overlooked RPGs of this generation" would probably be Dragon Quest VI's remake on the DS (one of the best games ever made); Infinite Space, also on the DS (an incredible 'Space Opera' style RPG); and Eternal Sonata, on the PS3 and Xbox 360.

Of course, it helps that I'm a sucker for Chopin.

Growlanser WoT is the best JRPG i have played this gen.

Ni no kuni is easily best RPG of this gen

WHO would disagree with that?!? It is!

Demon's Souls and Dark Souls are the best JRPG's to come out this entire generation and maybe ever. That's no exaggeration either, they're that damn amazing.

That's ONLY exaggeration, actually. While both are quite good, I can name about five or so from this generation alone that I would place above them. Don't even get me started on the last two gens. It's just me, but neither of the Souls games would make my top ten, even as much as I enjoy them.

It's not an exaggeration, but it's not a valid statement, either.

Both Demon's Souls and Dark Souls are WRPGs.

Western Roleplaying Games and Japanese Roleplaying games are defined by their individual characteristics--the aesthetics of play, the themes and ambience and setting and tone and a whole host of variables. They are -NOT- defined by the country they happened to be developed in.