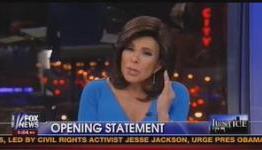 In the Fox News segment excerpted, Judge Jeanine Pirro argues that banning guns won't stop crime. She should certainly feel free to argue that position. But when she invokes video games in a preposterous culture-war argument, it's hard to take any of her comments seriously.

Kids Ahoy (from Pit to Boy)

Why Final Fantasy & Other JRPGs Make God The Last Boss