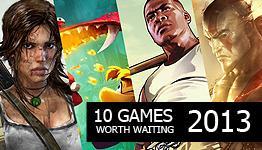 Here are 10 titles to wait for in 2013. The year 2013 will see many original video games, as well as the reboots to already successful franchises.

No sly cooper thieves in time!?!? Does Factual Evidence have to choke a bish!?!

Decent list, I disagree with a few things. For one, Where is South Park? That is my most anticipated game. I love Obsidian and I can't wait to play that game!

Also, how does this guy assume that Watch Dogs is coming in 2013? I have a feeling it wont be.

I can't wait for Last of Us, it's like The Road in video game format!

more like the road + i'm a legend + the walking dead
such an awesome game
it's no.1 on my list

The Road has got to be my favorite book of all time. Either it or All the Pretty Horses. Cormac McCarthy is brilliant.

And yeah, The Last of Us would be pretty similar I suppose, never thought of it. I hope they have that under the floorboards cannibal scene, would be so good. lol.

I'm just waiting on bioshock, last of us, and beyond two souls. Aside from that I'll just continue to save.

new DLC for borderlands 2, gearbox said they amy do more after the 4 dlc packs as planned. more content always better fr one of my favorite games from 2012

for my taste there are more games in first half of 2013 than there were in all of 2012, and we know nothing about fall 2013 yet(new consoles,new games are a safe bet)

Good to see at least one Wii U game on there and what a great game it is as far as I can tell from the demo. Also just like everyone else I can't wait for GTA5. And for some reason I seem to be really looking forward to Lego City Undercover it strikes me as a really awesome game.

everything but the jrpg...

Arma 3 nothing else even rates for me.

Bad list. Only good one was gta v. I'm waiting for bf4, gta v and lego city. All of these for wii u

For me I'd say

And that being said, since this is a top 10 list, I'm missing other games I want like Bayonetta 2, Sly 4, Luigi's Mansion Dark Moon and Soul Sacrifice. Next year is looking to be the best year this gen in terms of major releases. Definitely kills Q4 2011 imo.

I played the TR hunting demo or whatever its called and I loved it, the gameplay was smooth the climbing was fluent and the bow was fun too use while hunting for dear. Although I think it was being played on a suped up PC the game looked great a little dark but still pretty.

Cant wait for it.

Aliens colonial marines MP was pretty intense but I felt like a sheep because I played as the marines but it was still really fun getting that also.

The only games I know Im getting for sure next year are...

Thats alot of cash and there are games yet to be announced, last year was pretty stale compared to the stellar 2011 lineup but 2013 seems like a great year for gaming.

Condensing it down to just ten is incredibly difficult but i'll give it a shot.

There are lots of games to be excited for however there is only one game Ill be truly opening the New Year's with.....

i was really excited for heart of the swarm and rome total war 2!

The Last of Us, GTAV and Bioshock Infinite. There are more, but those one are the top of the top. Besides that, there are the vaporware known as Versus XIII and The Last Guardian.

i agree with everything on the list except for 3 of the picks, but my top 5 anticipeted games are

Why Ni no Kuni's Soundtrack Is Absolutely Magical 10 Years Later

How ‘The Last of Us’ changed gaming, strained relationships and spawned an empire