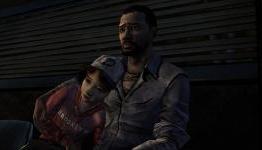 The Walking Dead is Overrated? Grow Up!

"When Telltale released the first episode of “The Walking Dead”, nobody, not even Telltale, knew how much buzz this game would get. As each episode released, many gamers began to claim that The Walking Dead was their game of the year, possibly snatching the title at the VGA’s (not that it mattered). True to that, the VGA’s and multiple other sites gave the game their award for Game of the Year, beating the likes of Far Cry 3 and Dishonored. And when I read what people have to say about it, I just think “Oh grow up will you”."

Who in their right mind is saying The Walking Dead is overrated?

Uninformed opinion... The game is more about the characters than the zombies.

That proves you didn't play the game or even watch the TV series.

What makes the walking dead so popular on all fronts is the character development. Sure there might be a few boring ones here and there, but overall the series have some great realistic characters. It shows the type of crazy things people do to survive. The message I got from the whole thing is to fear the living more than fearing the dead.

It's not about the zombies. The game is about how characters in the game react to the stressful environment they are placed in. Only 10% of the game requires you to kill zombies.

I would. I enjoyed it, but it still don't think it's as good as everyone is saying it is.

But each to their own I guess, there are definitely games out there that are more overrated than the walking dead..

I'm with you. I liked the game, but it's not quite the "revolution in storytelling" it's being made out to be. It's just a really good point and click adventure.

...and to be honest I kind of feel the same way about the show.

It isn't a bad game but I do think the game is a bit overrated. In my opinion its just riding along with the popularity of the show. The narrative is intense but the voice acting is mediocre at best and that's why I cant find myself connecting or having sympathy for any of the characters. Good game but not all that great.

its infinity better than the show. One of the reasons its better is because it doesn't have the whole kill a black guy thing going on.

Those who claim Journey to be "DA BEST G4ME EVUR!".

people who did not play it, or people who don't understand the walking dead world. a world where yes there are zombies but the real danger is other living people

The Walking Dead and Journey are overrated because they are winning too many Game of the Year awards! DAMN IT!

Its just silly yknow. People rage over something so meaningless.

They think just because a games popular, its overrated crap :l

I would accept the Journey stuff as that was a game, one where I had a bit more active role in one what was taking place on screen.

My time spent with Walking Dead I feel is more of a spectator than an active participant. It was just a weird disconnect I had a tough time getting over. I don't begrudge any publication for giving The Walking Dead their game of the year but I don't think it was a flat out better experience than a lot of other more traditional games.

It's funny, what you do in the walking dead determines the outcome of it fully./ In Journey, you literally walk and jump, you cannot die or lose etc, you just press and hold the buttons till you get to your destination. Yet, you had more of an Active role than the Walking dead?

It's odd anyway, thinking about which role is actually more active than the other. The walking dead in it's own sense, has you 'acting the role' more than ANY other game out there. Just because you're not in direct control of the character for the alot of it, does not mean your actions and controls do not affect gameplay.

Which game makes you feel like a spectator? The one where you get to go from point to point simply to look at the scenery and simply to get to the point, or the one where any action you make or fail to make can have dire consequences?

Keeping in mind that I LOVE both of these games and am not out to make either of them sound crap or anything, but that's literally what you do in both games. We all know there are more to oth of them than that, especially journey(describing this game makes it sound shit, so if someone asks you what it's like...just say "An epic journey that you should just play" Instead of saying "It's about running to a mountain in the middle of a desert" or "The gameplay consists of walking, jumping and singing")

Nothing about what you've said will make anyone think you actually played Journey.

For once i agree with Hicken! You can die in Journey.

The Walking Dead isn't overrated but Journey is. Just unbelievable how many people claim it as the greatest thing since sliced bread. Should've won OGOTY(Overrated Game Of The Year)instead.

It being overrated is a opinion just like it being game of the year is someone else opinion. why don't you grow and stop thinking every ons has the same opinion.

i dont think everybody has the same opinion. why does everybody think I do that?

No, I don't think its over rated. It was a great game and deserves goty IMO. I have always been a fan of telltale games so it nice to see them get some over due recognition. The Walking Dead is a great game, but I'm really going to miss Lee is Season 2.

It is overrated. Deal with it. I also think it's funny that he's saying to grow up when he's the one crying about it. The walking dead is mediocre anyways. Just more generic zombie bullshit.

Generic zombie bullshit? Have you even played it. Nothing generic about it.

Man, it's your opinion so... I don't give a fuck about it, and the millions of people that enjoyed it too.

Said the dude who never played it. Have fun with COD or Warcraft or whatever weak shit you play.

Where were these kinds of articles for Heavy Rain back then?

Heavy rain wasn't even given the time to become overrated so that statement doesn't make sense. Any one that played heavy rain knows that it wasn't a perfect game and actually admitted its flaws but even then Heavy Rain gave more control to the player than TWD does.

Heavy Rain was a great game but it had major issues,
Walking Dead Doesn't.

Also The Walking Dead is the only game that has successfully made me care about a child character and not get annoyed by everything they say.

so if someone thinks its overrated that means they need to "grow up"? thats kind of silly

Wait, there are people that take the VGAs seriously?

if you read the article, you'll see not even I took it seriously.

Telling someone to grow up because they like a game that you don't find appealing is childish. By the way The Walking Dead game was crazy good.

I played the walking dead demo and its very similar to Heavy rain yet almost everyone gated Heavy rain because of its gameplay , was it because it was PlayStation Exclusive? I wonder if it would of gotten GOTY if it was PS Exclusive

The Walking Dead doesn't have the massive plot issues, I would also say they don't play all that similarly.

Shit. Are we getting Hipsters in videogames now?!!

Meh I personally think that the source material got old long ago. As for the game itself being overrated, eh I don't know about that, I do wish that players had more ability to affect the outcome of things. Now the TV show is pure trash. But that is because TWD simply doesn't make good television.

Edit: For the record the person who wrote the article should be doing the growing up. He actually is giving credence to the idea that this series of games is indeed overrated. He is acting like TWD is some great trailblazer for these kinds of games which despite its' undeniable quality it simply is not.