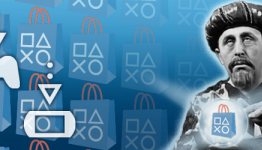 PlayStation Store Preview – December 18th, 2012: It’s an Oddworld After All

Even though there aren’t any more significant retail releases left in 2012, that doesn’t mean that there isn’t a packed digital release line-up left in store. This week is loaded with PSN releases and demos for both the PS3 and PS Vita. But best of all, Oddworld: Stranger’s Wrath is hitting the PlayStation Vita this week. Don’t forget, you can stock up on the year’s best games in the Holiday Essentials Sale starting this week.
-PSLS

Another good week. PS Store's been on fire lately.

Yes, it has. Just in case anyone wants to take advantage of LBP and Rayman on Tuesday, but are worried about it coming to plus, this is what Morgan Haro had to say about it.

"While some updates to the PS Vita Plus free games is coming shortly; there are some great deals on some PS Vita content with the Holiday Sale like LBP Vita and Rayman Origins. Those games are not slated to be free in Plus for PS Vita in the near future, so it may not be a bad idea to jump on those deals!"

Nothing worse than thinking your getting a great deal on a game and then seeing it free the next week. I'd be surprised if Rayman Origins ever becomes free on the Vita unless a new Rayman game were on the horizon for it. In fact I can't think of a single Ubisoft game that's been released on Plus. And LBP just released not too long ago, and will probably be at least 6+ months before it's considered.

Yes I accidently bought 3 extra copies of LBP ViTA. It was a good deal though. :P

I keep shaking my head in disbelief. How CAN they keep giving us games on PS+ like this? It seems I will be a lifetime member. I would be insane not to be.

I keep selling the games I already have that they add to + so my subscription is already paid for the first year after a month. SMH Sony... You treat us waaaay too good.

Yeah, always new stuff to check out. I don't think they've had a slow week all winter.

It's a shame that can't be said for the UK Ps Store thanks to the outrageously incompetent SCEE. We have the "12 days of Christmas" and a "Festive Sale" but that's all, and, the discounts haven't been as good as last year.

Stranger's Wrath for me! Love that game. Can't wait to play again on Vita.

I wish it was cross buy...
I'll mainly play it on Vita but still wish for the PS3 version though.

The Unfinished Swan is probably the best standalone PSN exclusive this year, I highly advise anyone who hasn't checked it out to download the demo, you'll love it.

I own journey. And I don't think it's so special. And btw, I actually love artsy, emotional games like Flower...

I'm entitled to my own opinion.

I'm waiting for it to come on sale in 12 deals of Christmas, should be out in the next day or two :-)

Nice did they confirm that for north America or is it only in Europe.

Probably Europe only as the other Christmas deals have been.

Most games have had around 50-60% off so should be pretty cheap.

Already played Strangers Wrath many years ago. I feel bad for brand loyal fanboys who only own one console.

I played it many years ago aswell, still buying it though because it has updated HD visuals and texture work and it's on a handheld which means i can play it anywhere.

who says people who only own one console are brand loyal fanboys. Perhaps they just arent a spoiled child like you and can't afford multiple systems. And frankly what does this have to do with anything in this comment section?

I want MORE vita games on ps plus!

Me too. And some psp, ps1, mini's, ps mobile games thrown in TOO to play on my vita (since there's not enough Vita games to be getting 3 of them a month

Whoa, Rayman Origins is an absolute steal at that price. I highly recommend buying that and both LittleBigPlanet games if you haven't already.

Any Free Plus Games this week? Or Are any of the old plus games that left returning?

I'm disgusted to see the PS2 games they have on the japanese PS Store (Capcom vs SNK 2, Dark Cloud, Bloody Roar 3...) compared to the junk we have on the european store... when we were getting PS2 games, that is.

Oh, and still no Retro City Rampage in Europe, how come I'm not surprised.

SCEE is an absolute disgrace. Even the folks at SCE France could do a better job at running the european branch of Playstation.
Whoever at SCEI in Japan is letting those utterly incompetent twats run the business at SCEE should resign before cutting off his finger and committing seppuku as an apology.

The truth! Although I feel the Japanese main office is equally responsible.

10 Games that Break the Fourth Wall

The Value of Dynamic Environments