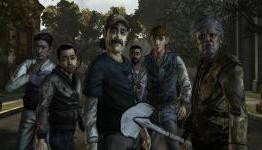 Why The Walking Dead is My Game of the Year

When [Damien Munoz] watched [his] first episode of AMC’s The Walking Dead, [he] was surprised how story driven a show based around a zombie apocalypse could be. Then, [Damien] read [his] first issue of the comic series to feel the same way. A fan of Telltale Games, thanks especially to their well-adapted Back to the Future game series, [Damien] immediately grew with excitement when [he] found out they were developing an episodic adventure game based on the series. However, [he] did not expect to love the game as much as I did…prepare for spoilers.

Cause of Ben! If Ben didn't evoked any emotion(mostly RAGE) then salute to you.

Ben didn't bother me much at all, which I guess is odd cuz everyone seems to be pissed with him. I understood he was a screw up right a way so I interacted with him like a parent with a bad kid, told he needs to be careful & quit screwing up or his arse was grass LOL. I like to think Ben feared & respected me...

Kenny was my gripe though... I helped that guy out countless times but because I would disagree with him when he would get irrational (read:crazy! LOL) he would act like a saboteur until he exausted his paranoia & came back to earth. It took a lot of restraint to not treat him like I did Ben.

I think now I should flip it & treat Ben like my bro & treat Kenny like the jerk he was on my next playthrough. I imagine the whole group will be dead by the end of episode 3 though, LOL! This WILL BE FUN!!!

Kenny drove me crazy, he was an ungrateful, selfish bastard.
At the end of the 4th episode when i asked for his help and he talked about all the times i let him down, even though i stood by him in all the crap he did, that was the final straw and i just told him to go [email protected]~k himself, which was nice to be able to do.

I also agree with Kenny. Then again, the guy lost his family in the game, and that was definitely a shock for him. I kinda feel bad for him.

I just wanted Ben to redeem himself, the poor bastard.

But yeah, Walking Dead has been my goty all year, but man, im playing Far Cry 3 (PC) now and its some of the best fun ive had in years.

It's your GOTY because you want hits, which is most likely why this article got made. Not buying it.

@ Dboi787. You call this guy ignorant yet in an above post you wrote; "Once you brought up COD, your argument became invalid. Sorry not sorry."

Google the word ignorant. I am guessing you wrote this article? If you are going to write opinion pieces and post them on the internet you probably should be able to accept criticism and others opinions. You're not going to make it very far if you act like an infant and throw a fit when someone is opposed to your opinion. You should be responding with well educated and thought out points that only strengthen your position. When you attack people for not agreeing with you or tell them they aren't being taken serious because they happen to like COD it shows your immaturity and worst of all, it shows you really don't have any real argument to respond.

Journey is still my personal GOTY.

Black Ops 2 Game Of The Year.