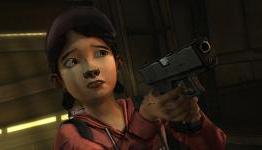 Why you need to play The Walking Dead now, before it's too late

Do you see that title up there? Really that’s all you need to read, go play Telltale’s take on The Walking Dead universe – quickly time is of the essence! Every second that ticks down brings a game shattering spoiler closer and closer to being revealed via Twitter, Facebook, Reddit or any other online avenue.

Usually when it comes to games this isn’t a massive problem, but with The Walking Dead story really is everything. Any relevatory morsel you pick up could potentially ruin a plot point which could unravel the entire game and all those devilishly challenging moral choices, so heed our warning go play it now!

Of course some of you out there won’t take our advice, instead you’ll wait until the arrival of Steam’s inevitably bonkers Holiday Sale and then you’ll buy a season pass only to push The Walking Dead back into the darkness where you keep the rest of your impulse buys, never to be played again. So rather than risking that unfortunate fate, we’re going to explain exactly why this release is so important without a spoiler in sight.

Before its too late? The world is not ending on the 21st.

Ah shit really?! If I'd known that then I wouldn't have washed down a bottle of sleeping pills with a bottle of JD...Oh well!

Even if it were it comes out on the 11th to retail, so we still got time.:)

Aaah I remember, few years ago, when people submitted news on N4G with huge hidden Gears of War 2 spoilers.
It was like:
"Here are new screenshots of MARCUS IS THE VILLAIN AND DOM IS A LOCUST SPY !".
It is true that the more important is the story in a game, the more likely you will be spoiled if you wait to much to play that game.

I haven't played The Walking Dead, but I had many feedbacks about the quality of its story, so I guess it belongs to that kind of "please don't spoil me" games.

I had it spoiled for me. Not just the end but tons of other things in the game. Fuck me.

I'm not too worried. I don't do Twitter and no-one I know on Facebook is likely to have played it.

I'm waiting for the disc version to come out.

This game has the best story/writing of the year.

Arguably it's already too late. As fantastic as it is, part of the joy that came from playing it was waiting for each new episode, the arrival of which was always welcome. Now that they're all out there, it's not the same. Still awesome though.

New season out in January!!!

I just got to 4th episode when the game crashed and I lost all my saves. Well atleast it doesn't take too much time to get to where I was, since I know what I have to do. It's just that replaying those episodes I've already done knowing the outcome of my actions takes a way the unique feeling you get when you make a mistake.

if it released in vita then i will consider it , but im not excited to play it on my ps3 ...

im even willing to play ps1 games XD , it's fun playing any where you want , it's hard to explain the reason , i just feel it worth to try everything in vita ...

Agree 0Disagree 0
▼✖-+
SPAMInappropriate
Show all comments (14)
The story is too old to be commented.
80°