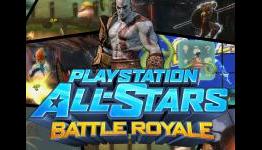 Gordon Bryant says: "I won't lie, just a couple weeks ago I had very little interest in picking up PlayStation All-Stars Battle Royale - I had played the demo at E3 and got into the beta but the game wasn't really catching my interest. It felt okay, but it really didn't work for me despite my own insistence that this is not Smash Bros. and therefore should not be compared to Smash Bros. The truth is you can't really talk about a game's quality without comparing it to its only direct competitor, no matter how much you try. Trust me, I went through three drafts of this review before accepting that yes, this game was clearly inspired by Smash Bros., and no, that does not make it an inferior game. PlayStation All-Stars Battle Royale (called simply PlayStation All-Stars from here on out) is inspired by a great game, but brings its own identity to the genre to become its own greatness, and with luck and time, I'm sure it will spawn its own franchise to compete with Nintendo's established brand."

Better than Smash Bros then?

I wouldn't say that, no. I mean, it's very good, and a lot of fun, but I don't think anything will dethrone Smash Brothers as the go to party brawler.

Keep in mind, Smash Brothers Brawl is one of my top 10 games of all time. It will be very hard to unseat that gem of a game.

It's a solid first effort...too early to say whether it will grow into a series. But yes, being a first attempt, and a good one, it doesn't come close to the amount of content and polish in a new Smash Bros. Of course, Nintendo has had years to work on its franchise.

oh, I totally agree! this game is great, but its not as good as Smash Brothers in terms of content or variety. if the sequel to this game is as substantial as the skip from SSB to Melee, this will match Brawl.

Good times. It will be great to see two similar yet distinct products on the market. Will be good for everyone.

Each have entirely different gameplay. I would say both games are good and have that quality where the hardcore and casual audience can enjoy them.

I think noone expected it to dethrone Smash Bros.
It's a very good first effort and a lot of fun, and unlike any other experience you get on PS3.
PS3 owners should support SuperBot by buying this game because there is a lot of potential in it.

I feel like a whore for saying this, but that's a very important point. EVERY sony fan should pick this up if for not other reason than to support the developer and encourage them to expand on it or make a sequel. While this was awesome and fun, imagine a sequel where there's an actual story and more game modes to explore!

The possibilities are endless, and with the different scoring method, it has a lot of its own adaptations to make.

Great job with your review!
It's clear you enjoy the game, hope it will keep enjoying your for some time! :-)

We just need more characters and this will be a beast

I'm enjoying the game and, some balance issues and the lack of context in the single player mode aside, I think they've nailed a very good basis to progress this into a series.

It's a solid game and a lot of fun, but there's definite areas of improvement, most of which I could go into, but want to prevent spoilers.

I WILL eventually purchase this game!

How does Big Daddy play? Im a big Bioshock fan!

this game is a lot of fun, and i hope it gets the support it deserves, the only issues i have is some characters are a waste like big daddy, he has very few moves and there is far to much move spamming in the multiplayer, some people play this game like the game only has one button, other than that its a blast

I disagree and agree at the same time.

Yes some characters are a "waste", but it really boils down to how and what you're trying to do. I've seen a few teams use big daddy to stun people in place and then finish them with someone like Parappa. Sure it's cheap / less than desirable, but it definitely shows there IS a use for him.

With this being said, I really wish there were less cheap tactics online. I get tired of Drake spamming barrels, Sackboy constantly shooting cup cakes, Radec spamming from a distance, etc. Very few matchs seem to be free of cheap nonsense that ruins my fun.

I think I might get this when the price drops a little. I've been with Sony since the PS1. Don't call me a fanbooy; call me a loyalist.

The gameplay mechanics are great. The frills around the gameplay are terrible. The CG, Stages and ingame characters look great and rival cutscenes are cool but the rest of the game is horrendous and amateurish. I am sorry but Sonic all stars racing is coming and look at the presentation in that game, top notch from top to bottom. This game is very good in the areas where it is supposed to be but it is the bells and whistles and attention to detail that put games like this over the top. The roster has actual characters that would be in a traditional fighting game and 1 v 1 works very well which is a feat. People don't want to say it but I will the frills aside from a traditional fighting game player this game is better mechanically than Smash brothers. Yes, I said it get over it. However, the value in the frills, bells and whistles which is the fan service is not there at all and Smash has this game beat overall in the quality of the experience. For a SF2 to VF to Tekken type player as far as fighting game mechanics go PSABR is better than Smash. Conclusion Smash is a better value and more polished game than PSABR.

SO unbalanced in multiplayer. It doesn't matter how well youre fighting..if the other person has an easier/more powerful super they can rack up kills really quickly and it feels really cheap. I was looking forward to this game but between the lack of a decent single player mode and the overall sheer frustration of multiplayer fighting this game was a letdown. Superbot needs to put some more effort in it's presentation next time around and just have a health bar or something..no one is gonna hate it for having that literally every other fighter has!

there is surprising depth in the fighting mechanic. should i do the risky level 1 super that i can get knocked out of? or do i save up for level 2 and run around for 10 seconds trying to chase players around....or should i save up for level 3 that practically guarantees kills? i do agree there are unbalanced fighters (superbot should nerf kratos...he shouldn't build 3 levels that fast) but what fighter doesn't have its ryu or wesker? but man i do think the presentation is sorely lacking (menus, artwork, etc...) but that shouldnt take away from the fun to be had....just when i think i have my main character favorite....i try another character and get sucked in to perfecting him/her....i love this game its highly enjoyable.

I was checking this game out at Gamestop. LOL! What a joke of a game. Button masher for noobs. The majority of reviews have been crappy for this game.

Man this Sony exclusive was hyped up to death on here. Talk about failing big time.

Btw, Thanks for ruining my favorite Sony character in Kratos. Kratos fighting Papa Rappa? What a joke.

U know what's a joke? Your lone bubble. Well, I guess i'm wasting my time--it's not like u can respond back lol.

Only a true sony fan will tell themselves that this game is not like. Smash bros, when the truth is its a carbon copy and a rip off of smash bros, and the sad thing is its not even close to being better than smash bros. getting rid of the percentage health, the pot holes you can fall into, and knocking people in the background, its still a copy off of smash bros no matter how you slice it.

I hated the beta to this game and it is far inferior to smash in every way down to the lame characters, gameplay, and content, but im not hating. I think I mite just pick up the retail version. Oh, and just for the record, its not better than smash and dont thu k it will ever be not even a sequel.

OK lets say it is a smash bros carbon copy, whats wrong with that? last i checked Nintendo isn't the only company allowed to make a 4 player brawler. it getting old how everybody wants to hate on this game because its like smash bros, when almost every other game in the world is like something else, but does that stop the games from being good? this game is inspired by smash bros, YES! nobody even the developers are denying that fact, but to call it a carbon copy when you even listed off the ways in how the games are different is dumb, so either you don't know what a carbon copy is, or your just being a fanboy... you like smash bros more than you like all stars? cool, i'm happy for you. why don't get off the internet trolling and go play it then.

im enjoying the hell out of this game , me and 3 of my friends all picked it up on black friday even made my cousin buy a ps3 to play it with us , not smash bros not quite but its going to have its own style and this is something there going to build on and even more DLC is on its way which im excited over