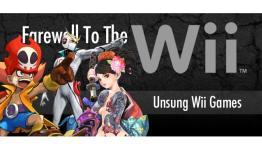 PixlBit | "Unsung Wii games… where do you even start? Just about everything that came out on the Wii that wasn’t a major blockbuster went relatively unnoticed. Having written for a Nintendo-only site for a number of years, I had a unique opportunity to play many games that were off the radar for most Wii owners.

Due to its lack of graphical prowess and unique control scheme, most core gamers directed their attention elsewhere for their gaming experiences, whether it be their Xbox 360, PlayStation 3, or PC. Sure, all walks of gamer hit their local store for Twilight Princess & Skyward Sword, Super Mario Galaxy 1 & 2, No More Heroes, and Mario Kart Wii, but how many really sought out titles like Excitebots or Little King’s Story? Not many, if sales are any indication.

While the definition of “unsung” is somewhat relative, I’ve pared down my list to just games that didn’t see much commercial success or much coverage from the large-scale gaming media. With seventeen titles/series on the list, there’s plenty for you to play on your motion-control enabled console before you decide to kick it to the wolves at Gamestop."

Wow, so glad Fragile made the list. I would love to replay it right now.

This list is one of the best I've seen. All of these games mentioned are quality, must have titles for any Wii library collection. The author clearly understands what is fun and makes a great gaming experience.

One of my favorite games this generation. I just loved the whole atmosphere.

So many great games there that sadly a lot of people will never play. The fact that the Wii has so many unsung gems is one of the reasons it's the best console of this generation unfortunately most people don't see it.

let's not forget MADWORLD, AND THE TRAUMA CENTER GAMES, THESE were the best wii games out there. I hope wii u versions are on the way.. can you imagine doing surgery, with the game bad like and x ray machine? wow! i hope some one listens to me!

Hidden gems and overlooked treasures - Most Underrated Games of All Time

What do you need to know about Vanillaware?