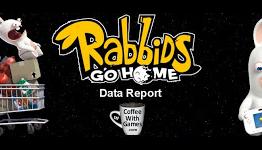 "The Rabbids will be finding a new home this Sunday in North America, when the Wii U launches and they start invading the console through Rabbids LAND; but the Rabbids have had a home on the Wii for the last several years.

Rabbids Go Home was released on November 3, 2009 for the Wii, at a MSRP of $49.99. It was the Rabbids' first comedy-adventure, according to Ubisoft, and players helped the Rabbids collect junk in their attempt to make a ladder of sorts, to the moon. The game was developed by Ubisoft Montpellier, and received an ESRB rating of "EVERYONE 10+" with "Cartoon Violence, Crude Humor, Mild Language, Mild Suggestive Themes, Tobacco Reference" listed as content for gamers and parents to be aware of.

How many U.S. Wii owners have reported playing Rabbids Go Home, and how many hours have they reported trying to help the Rabbids get home? Brew yourself some coffee, and let's take a look!", writes CoffeeWithGames.

Farewell to the Wii: The Channels

Review: Nobody Saves the World - A nice surprise - Gaming Boulevard