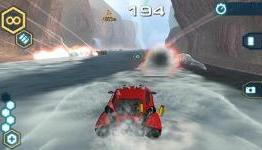 In the three decades since Spy Hunter was a powerful name in videogames there have been many attempts to reboot the franchise, all of which have been received poorly at retail despite their varying quality. The latest effort, this time handled by handheld aficionados TT-Fusion, eschews the traditional desire for a big blockbuster home console release and instead opts for the path of least resistance by delivering an action-packed arcade racer on Nintendo 3DS and PlayStation Vita, the latter of which Electronic Theatre will be discussing in this review.

So this horrible game gets better scores than CoD Black Ops??? HAHA what a JOKE all the reviewers nowadays are exactly that a JOKE! This is the last time ill ever take into account what a reviewer thinks. This system is retarded

I remember having SO MUCH fun with Spy Hunter on the NES!