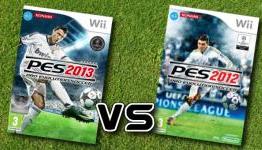 Nintendo Gamer - You may remember when a month or so ago we received a copy of FIFA 13 on the Wii and quickly realised it was absolute identical to FIFA 12, save for a roster update.

At the time we slammed EA for this, calling it “a £30 roster update” and telling them they should have been ashamed of themselves. After all, they were pulling the wool over Wii owners’ eyes and masquerading FIFA 13 as a new game when in reality it wasn’t.