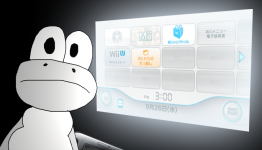 Wii U BC The Most Ghetto BC Ever

Not getting a wiiu but that's very cool.

That's not 100% backwards at all. At least you can play your Wii games on the Wii U. Yes, upscaling would be cool, but I would hardly call that a real dealbreaker.

So true and considering the upscaling thing was one of the bigger problems for the ps3 and 360 it isn't surprising they left it out. It would have been nice, but like you said at least you can play your Wii games.

Hmmm. I'm still debating whether I'll get one right away.
I'm so excited by the Wii U, but at the same time there are no real 'deal breaker' games at launch that I don't have on 360 and PS3.

I got to play NSMBU, and it was much funner than I had anticipated. I'm eager to find out what ZombiU will turn out like as well.

I'll probably just succumb to my own excitement and get one a few days after it launches (Provided it doesn't sell out). I'm sure many others are super excited to see what Metroid, Zelda and many of the JRPG's will be like on the Wii U. It has the potential to be better than both the Xbox 360 and the PS3.

Honestly, if you don't see anything you want right away then just wait a month or two. Make sure you purchase the WiiU because there are several quality titles or features that you want. Don't let your purchase of the WiiU turn into a situation where you play with the machine once and then never play it again. That happened to a lot of people with the Wii. So make sure you will actually be using the WiiU a lot before you buy it. I am going to get a WiiU a few months down the line, but right now there are enough quality titles to satisfy me.

Oh god no. I don't plan on letting it collect dust. I'll probably be buying most multi-plats on the Wii U PLUS exclusives.

My PS3 and 360 will be solely for exclusives, provided there are enough online players on the Wii U.

I don't like how Nintendo does backwards comp, but its the same as it was on Wii for playing game cube games. You had to boot into game cube mode to play GC games and all Wii functionality was turned off because you were basically playing a game cube.

Like anyone else's BC model is any better. Most PS3s don't play PS2 games and the 360's backwards compatibility is a joke. Many 360 slims can't even play original Xbox discs, only downloaded games.

You're sick of people wanting BC? You should probably lighten up a bit, its not that big of a deal. Honestly, it should be offered as an option if anything. I'm sure people wouldn't mind paying a little more for an SKU that offers it.

There are gamers who want it because they've amassed a nice collection over the years. I keep my consoles hooked up at all times though. My living room tv has snes, 64, dreamcast, ps2, xbox, wii, ps3 and 360.

Its not about playing old games on new hardware. It would be nice to condense some of them down and play my titles through 1 console is all. People, like myself, have hundreds of games on their shelf that essentially become obsolete unless you keep the old hardware. Some convenience would be nice is all. Its not necessarily a make or break situation, just ease of use to further support your product as a whole would be cool.

Chris the red head, I understand why you would want the option of backward comp., you are a true gamer to own all those consoles, but in the business world the manufacters want to make money and not lose money also I'd rather have Microsoft/Sony focus there engineering on moving forward and not sacrificing ram/internal components then to please the very few who own all the consoles. If anything they can put your classic games on live marketplace or psn/soe. And you can repurchase the games on there. That would be even more conveinant. Because you'll never have to put a disc in the tray and wait for it to load.

you just lost everyone.

This backwards compatibility isn't ideal, far from it but at least its there.

This is potentially a good thing... If it's running the Wii System Menu it's probably exploitable, just like it is on the Wii. It won't break Wii U mode but it could mean all those delicious emulators I have on my Wii could be moved to my Wii U :)

its official. Gamers are cry babies. Why is this an issue? Thats how Wii worked