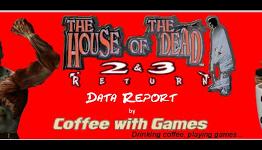 "The House of the Dead 2 & 3 Return released for the Nintendo Wii on March 11, 2008. The game was published by Sega, and it received an ESRB rating of "MATURE" with "Blood and Gore, Violence" listed as content for gamers and parents to be aware of.

How many hours of gameplay can you expect battling the undead in The House of the Dead 2 & 3 Return if you haven't played it? How many U.S. Wii owners have reported playing the game, and how many hours have they reported playing it since the game released over 4 years ago? Brew yourself some coffee, and let's take a look!", writes CoffeeWithGames.

Revisiting The House of the Dead 2