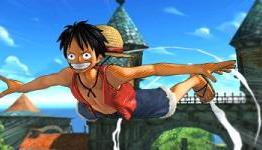 "I am fairly new to the world of One Piece, as I only started watching the adventures of Monkey D. Luffy and his diverse group of companions called the Straw Hats a few months back. Story-wise, I am well behind where the anime currently sits with its 500+ episodes. That said, I can appreciate Omega Force’s attempt to blend the Dynasty Warriors formula with the extremely popular series, and you know what? It could very well be my favourite spin-off of the Warriors series so far. Fans of the anime are in for a treat as this isn't just a good One Piece game, but a rather entertaining game in general." (darkzero)

7 Things About: One Piece: Pirate Warriors

Namco Bandai Marks Naruto, One Piece off 50% on PSN