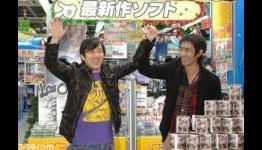 4 Game Releases That Went Worse Than You Thought

GP writer Jared discusses four different game releases that were plagued by problems from the get-go.

gamepodunk.com
- Comments (5)+ Comments (5)
TopNewestOldest
The story is too old to be commented.

I hate when ghosts ruin big game releases. This wouldn't have happened if the Ghost Busters were still around.

Ghosts ruin everything in general. Even post-launch, all those dumb ghosts in games causing bugs.

Interesting fact about Lair. And who would want toilet paper? :(

I wanted the Wii version specifically for the reasons cited. Too bad the used copy I bought turned out defective. The PC version wouldn't run on the PC I had at the time. I ended up buying the 360 version the very same day I bought the XBox 360 because I gave up hope in ever finding a functional Wii version and I wasn't gonna wait any longer to buy an HD console.

I bought Bully: Scholarship Edition on release day and never had a problem with it. I guess I got lucky.