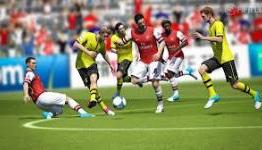 IGN:The foundation has become so solid sometimes those innovations are subtle, but in FIFA 13 on PlayStation Vita they’re imperceptible, Why? Because there aren’t any really.

Wasn't this released over a week ago?

U think Sony will work on a vita 2 down the road?

not for nothin but this is just another review from another journalist that insists on comparing vita games to console games instead of their other portable counterparts.

These vita games should be compared to 3DS version, iOS and android, not home consoles.

If EA didn't want this compared to the consoles version, they shouldn't have called it FIFA 13. Plain and Simple.

Did you even read the article? FIFA 13 on Vita is the LITERALLY a re-skin of FIFA Soccer on Vita. It is LITERALLY copy and paste. THAT is why it is receiving such a poor score.

What's that? You say Activision does the same thing with Call of Duty? NO, THEY REALLY DON'T.

Although I agree with some your posts, I don't think ppl say that Activision takes a copy and paste approach, I think the go to thought about them is they reskin the game.

Anyways, It's perfectly fine to name a portable as they please, I hate it when they give it a special portable name. As logic goes, we should know the limitation of the portable.

Much like the Wii version of games are named the same, they aren't named Fifa 11 Wii edition, yet that is clearly the inferior version with much of the features left off.

This was a very lazy thing EA did, I'm actually very outraged that they did this.

Although in all fairness the games is really good, just not good if you have Fifa 12.

i did read the article. Thats why I posted what I posted. Did you read my comment? I never disagreed or commented on the content of the article. Its the faulty comparisons that are bothering me.

Did you see any mention of any other mobile platorms that they were comparing it to? Cause I didnt.

I think Sony should had release their Soccer and basketball games on the Vita. I know Sony last NBA game(NBA 10) was only for PSP. Since there is no NBA game for vita this year, Sony would of had the market to themselves.

And since EA soccer game is getting blasted, Sony should of had their own soccer for vita.

'Monster Hunter 3 Ultimate,' 'SimCity' and others cut $20 at Target