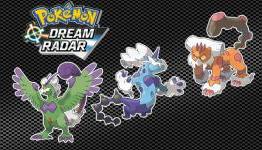 Nate writes - "The Pokémon Dream Radar is a new side series game released through the Nintendo eShop for $2.99USD. Taking advantage of the 3DS’s gyroscope feature, this game is a brand new concept in the Pokémon series. It is very rare to find a side series game that allows you interact directly with the other Pokémon games from that generation, and this is the first one that doesn’t require you to have another system to connect them (Assuming you have a 3DS). Also a first for this game is the ability for a Generation V game to recognize a Generation IV cartridge, also allowing you to collect special Pokémon when they are inserted into your 3DS. Previously this was impossible due to the fact that both generations are made for Nintendo DS and the DS has only one cartridge slot. Pokémon Dream Radar is a point-and-shoot game that allows you to catch many Pokemon from the new extended Unova Pokédex as well as the new therian formes of Tornadus, Thunderus, and Landorus and send them"

newenglandgamer.com
- Comments (1)+ Comments (1)
TopNewestOldest
The story is too old to be commented.

This was addicting, although I went the cheating route and finished the game in less than two days. It's very fun if you don't do what I did...

Too bad you can't trade the Therian forms though, I didn't want them, and wanted to give them to my friend oh well.