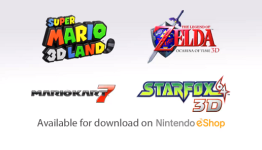 Talking Point: Nintendo Takes One Step Forward, One Back With Retail Downloads

During last week's Nintendo Direct broadcast in Europe, one eShop announcement that received relatively little fanfare was confirmation that a number of additional first-party titles were being made available on the platform. These titles stretch back to the earliest months of the system: now available on the European eShop for download are Super Mario 3D Land, Mario Kart 7, The Legend of Zelda: Ocarina of Time 3D and Star Fox 64 3D, with all four set to arrive on the North American store on 18th November. Nintendo Life assesses this latest move in Nintendo's retail download offering, and considers areas for improvement.

nintendolife.com
- Comments (4)+ Comments (4)
TopNewestOldest
The story is too old to be commented.

This should be simple, Nintendo.

Step 1) Release your ENTIRE CATALOG, or at least a big chunk of it. There are only a few exceptions, but pretty much every N64-and-earlier game is good to go. There is no sense in releasing games at a slow trickle. And for retail releases, tie it into your account system.

Step 2) Make a unified account system. For two reasons. First, let us buy your old games and then KEEP them from generation to generation. Second, let us play it on whatever Nintendo system I want. I shouldn't have to buy SNES games on 3DS and then re-buy them on Wii or WiiU.

Step 3) Give us more incentive to buy a game digitally instead of a physical copy. This is something that ALL videogame consoles SHOULD have been doing since Day 1.

I understand the need to release them slowly. They do it to increases sales. But really, they should be release at least 5 to 10 times as many games per week as they have. Every other point, I agree with completely. Especially about allowing the downloads to play on all systems. A unifies account system must happen!

The reality is that it does NOT increase sales! GoG.com has proven that. People actually hesitate to buy games (the dismal sales on the Wii VC is evidence) if they aren't sure the service is going to continue coming out with new games.