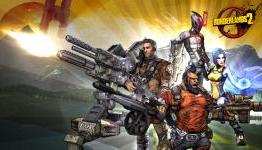 Borderlands 2 will feature four story-driven DLC additions that will be available for full price to everyone, but if you jump into the Season Pass for just $30 – you will get those four DLC packs for the discounted price. But, there is planned DLC NOT included in the season pass.

Pitchford says it isn't related to the campaign, so I'm thinking potentially it is a different mode- maybe TDM or something?

Hopefully it's related to multiplayer. $30 for the season pass + $60 for the game...I'm growing tired of reaching further into my pocket for content.

I couldn't imagine paying for guns when you get randomly generated ones throughout the game and characters go back to the campaign, so this is questionable.

I'm not saying I don't want TDM/CTF style modes to be released, I don't think I'd ever play them though. I'm just REALLY iffy on how something like that would handle.

36$ for the game, 22.50 for the season pass on my end. I know this doesn't apply to everyone, but if you enjoy the game, enjoy the content in the game and want more and think the expansions/addons/DLC coming out is worth it (and the company's practices are what you want to follow) then there shouldn't be much of an issue...paying full price is "no bueno" though, I see what you mean...

I know GameStop had some sort of contest about naming a gun :S probably related to being a legendary or something though...I sure as heck wouldn't pay for guns either...I like how they are introducing the new "Seraph"(?) rarity to the next DLC, that's a difficult question as well.

http://www.justpushstart.co... (the link that states about seraph weapons if it wasn't this one already haha)

(also wanted to say by the look of the DPS of the weapon...it probably isn't all that high of an area for level...)

About the other DLC not pertaining to story, I can see there being more playable classes of course. Maybe some sort of challenge modes or something added in. If there are competitive modes added I hope they pull it off well :)

I guess I'll write down as a side-note, which people probably figure...hopefully for the first playthrough it's a decent level, but of course any playthrough after that is hard to say.

(as I'm talking about the upcoming DLC)

10 Non-Christmas Games to Get You in the Holiday Spirit

Top 10 of the Most Fun Side Quests in Gaming

Borderlands: The Handsome Collection is free at Epic Games Store