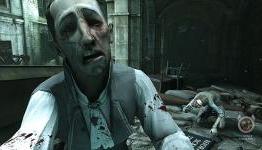 "So let’s get the similarities out the way first - Yes Dishonored looks and plays like BioShock. However, if you did a bit of digging, you’ll also find out that the team behind it - Arkane Studios - also had their hands in developing BioShock 2. So it goes without saying that there may have been some influence rubbing off in this game’s development, and let’s be honest, BioShock is a decent title that you’d wouldn’t mind rubbing up against. So does Dishonored stand alone by itself, or is it another BioShock in disguise? With mask on, let’s go and kill some rats."

consolemonster.com
- Comments (0)+ Comments (0)
TopNewestOldest
The story is too old to be commented.
110°8