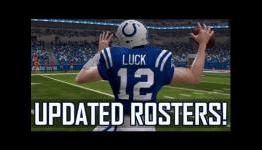 Sports games have gotten pretty good lately, but there was a time when every year you had games that only made minor improvements, but we still went out and dropped the 65$ on it. Am I at fault for dropping the cash and letting the developers get away with a glorified roster update, or is it OK because I'm a hardcore NBA and NFL fan?

Adhttps://www.releases.com/?utm_source=n4g&utm_medium=native&utm_campaign=c1
- Comments (6)+ Comments (6)
TopNewestOldest
The story is too old to be commented.

Long answer: If they add enough to the game where its not identical to last years iteration and adds must have features to the games that make it more in depth (I.e. NBA 2K13, MLB 12 The Show, NHL 13) then absolutely. If its almost rinse and repeat and has a barrage of new features that almost get overshadowed by what was taken out from previous iterations then no.

in most cases no.

However there are games that provide tons of new content yearly (besides team updates , obviously). Mlb the show, nhl and to a lesser extent nba2k13 are prime examples

I agree with you guys. NHL and The Show switch it up every year, which is solid. Madden goes back and forth between offense and defense orientation.

The problem is that it's difficult to change the video game when the actual game remains stagnant. Football is football, what can EA change in the gameplay? The thing that really annoys me, is the same bad commentary year after year. COD gets a lot of crap for being the same game YoY, but at least it's an upgrade and different levels. I buy Madden every year, and literally the commentary hasn't changed in three years!

Madden is a whole nother beast. They simply don't capture the essence of the NFL the way their very own studio captures college ball in NCAA Football. Madden added some nice things this year but to me its overshadowed by what they took out of franchise mode, still no halftime show and still no post game show. Overall Madden just doesn't create that illusion or immersion the way NHL, The Show or NBA 2K does.

When you play those other games sometimes you can mistake it for a real life broadcast and others unfamiliar with gaming watching you play could easily make that mistake of thinking its real at first glance as well.

With Madden they just refuse to fully commit to replicating a broadcast and that'd be OK if we had an alternate NFL, or heck any football, game. But we don't and Madden 13 still is not up to par with NFL 2K5, an 8 year old LAST gen game smh.

Edit: when it comes to the commentary they have improved it this year but as always the play-by-play Guy (Jim nantz) gets repetitive and dull especially after a few years into connected career mode and he's still rambling on about the 2012 season storylines. I think the issue with the commentary is it isn't dynamic and is shortsighted and the script is a little stale as you'll still here Nantz spout similar lines as past commentators.

Finding a way to add dynamic commentary in sports games could be huge next gen.

i didnt read the Article but Hell NO!! its not SMART ,its lazy and Stops Innovations

The Most Influential Features in Madden History: Part 4 of 4