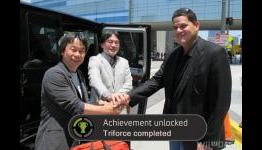 There is a misguided consensus amongst quite a few that Nintendo are directly competing with Sony and Microsoft, which I personally believe they stopped attempting to do quite a few years ago: even if Nintendo themselves seem to forget this on occasion.

whatculture.com
- Comments (19)+ Comments (19)
TopNewestOldest
Expand all
The story is too old to be commented.

im sold on the wii u until ps4 comes out, i will be anticipating the next zelda and metroid.

I think it could very much be a hard sell. I think the majority of it depends on launch price though. Guess we'll find out!

If it is dirt cheap then it is worth it. If it is a reasonable/normal price I am going to wait until I see what the other two have to offer (might as well way up my options and not rush buy). Consoles are not cheap even if priced reasonably.

That's the only thing I'm waiting for. They convinced me on the tablet controller, they covinced me with games I wanna play (big problem for me with the Wii had very few great games) now all that is left is the price. $250 is perfect, 300 would be okay.

It's a first day buy for me.

Not really. People will buy it because of Nintendo's games. Nintendo have the easiest sales in the industry because of how big their franchises are.

It's an easy sell for people who enjoy Nintendo franchises

I'm looking forward to it.

People have complained that Nintendo needed an HD Wii, we get one and people complain it isn't good enough, you'll never please internet people, so its a good thing that they are the vocal minority.

What Nintendo is doing that is smart is releasing their next gen console a year, possibly longer, before the competition. So all the core gamer's that absolutely have to own new hardware will buy it, then by the time the next Sony and Microsoft consoles do release, Nintendo will have all their top franchises ready to go in HD for the first time.

Oh, here is the PS4 and Xbox 720 and they launch with Call Of Duty Modern Warfare 3, while you can get Super Smash Bro's HD, Metroid HD, Zelda HD and Mario Kart in HD. It is a lot like what Microsoft did, release early, then when the competition is about to release their new consoles, you spam with great games.

Hmm...how do you know what games the next MS/Sony console will launch with?I've complained about Nintendo and their lack of new[meaningful]franchises and always taking the back seat hardware wise.I'm not sold on the Wii-U right now.I won't buy another Nintendo console until i see more than the typical first party titles that you listed above.

The likelihood is that Microsoft and Sony wont waste well known brands to launch their next consoles. I wouldn't expect Halo, Fable, Gears or Forza on the Xbox 720 to launch, and I wouldn't expect God Of War, Gran Turismo, Uncharted or Killzone to kick off the PS4.

Companies usually go with new IP's or lesser IP's and then a year or so later they break out the good stuff once developers have a handle on what they are working with.

The Xbox 360 launch had some classics for sure,but the ones that launched around a year later looked so much better. Anything could happen, but I'm always stoked for new hardware.

It was an example, November 2013 would be the IW COD game though, so it would be MW4, which is what I meant to put in the first place.

why would ps4 and xbox3 release with modern warfare 3 as a launch game?

I am a playstation fanboy but still can,t say no when a new nintendo comes out.

I wish to all nintendo fans the best for the wiiu launch.

I already have a current gen system. I'll wait for a next gen system to come out

I'm buying it, zelda is one of my all time favorite game series.