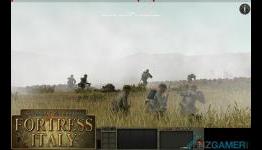 Flush with the success of the defeat of the Germans and Italians in North Africa, it was time for the allies to open a new front in the battle against Nazi Germany. Urged on by Churchill, the plan was to go for the soft underbelly of Europe. A combined thrust across Sicily, and up through mainland Italy.

Adhttps://www.youtube.com/watch?v=EjfojxXOobE&t=463s
- Comments (0)+ Comments (0)
TopNewestOldest
The story is too old to be commented.
0°