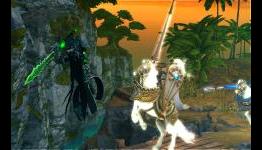 Ubisoft has announced both a new expansion and a Gold Edition for their tactical strategy game, Might & Magic Heroes VI. The second expansion will be called Danse Macabre, and will be available on the 28th September. The Might & Magic VI Gold Edition will include the main game and both expansions including Danse Macabre, and will also be released on the 28th.