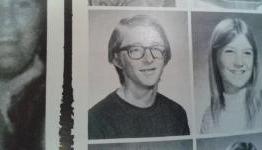 This is Gabe Newell in His Freshman Year of High School

It's only his freshman year, that's why the Valve co-founder and boss hasn't yet been voted Most Likely to Succeed.

Adhttps://store.steampowered.com/app/1488200/Symphony_of_War_The_Nephilim_Saga/?utm_source=n4g&utm_medium=native&utm_campaign=sow_n4g_native&utm_content=png
- Comments (74)+ Comments (74)
TopNewestOldest
Expand all
The story is too old to be commented.

I guess working in Valve is very stressful...gotta have them donuts coming...

@ Lovable You just delayed Half Life 2 ep3 another year with that comment.

Ah the wonders and Joy of being a Freshman. So young, so eager to learn with that innocent gleam in their eyes!

All those hrs of beta testing his games have taken a toll on his weight. Cant imagine how big he would get when Half life 3 releases

A fat joke a day keeps Half-Life 3 away.

Damn, he was a skinny kid, and he discovered that fatty high calorie sugar filled food combined with sitting on your ass all day makes you the size of a planet... something just about most gamers either have discovered or are currently discovering lol

I can kinda see Kleiner...

NOTHING to do with gaming.

It's Gabe Newell before he became a genious. Of course it has to do with gaming he's one of the heads in the industry. If he pooped it would be a pixelated turd in half life.

Have to agree with pixelsword. We don't need to know what Gabe Newell looked like as a teenager. This isn't one of those MSN sites that cover "what your favorite celebrities looked like in school."

What game does this have to do with? Is this article going to increase the likelihood of a new Valve game being announced or released? Does it talk about gameplay or development? No. So it's not about gaming at all.

Yea lets all just be assholes about it. Just appreciate it for what it is: a little look into the past of one of the industry's greats.

Why so serious? This site is already filled with submission violations that are approved by friends while more legitimate submissions get denied. We get to hear people complaining about blogs, and obvious flamebait articles all the time, but when a 3 line "article" about what a current game developer looked like as a kid shows up it's "legitimate news?" Since when? Sorry, but this site is called NEWS4Gamers, not yearbookphotosforfangirls.

Seriously just let it go. You sound like one of those cliche butt hurt hall monitors from the movies that runs around the school crying about violation this regulation that blahblahblah.

Im aware of the problem youre talking about, but this isnt part of it. This isnt flame bait at all.

If you look at the tag "culture" under the article, I think you will see that this fits that description. There has to be almost 30 tags that an article can fall under, and they arent all related to news.

If you don't like an article, browse around for another.

Haven't been here for a year, but I'm glad to see a lot of idiots still can't figure out that there's more to this site than the front page.

That or he always has the Munchies.

He just needs a big body for his big heart.

Goddam that is ugly.

I'm sure having 3 Billion was worth the stess lol

I just threw up in my mouth a little bit.

I just came in my pants alot.

You mean double tap??? Never can be too careful!!!

Don't know why but he reminds me of Screech from Saved by the bell.

He's an example of why you shouldn't be mean to less popular kids.

So the people in here who has daughters/sisters, make sure they be more kind to all people.

As my grade school teachers always told me: Never make fun of geeks. They WILL be your boss one day.

This. Besides, the nerds and geeks are the ones to make our technology better(:
Jocks and preps, sure they may be "cool," but they ain't going anywhere after HS.

Nerds. Not geeks. There's a difference....

The Day Before He Discovered Pie & Milkshakes.

I doubt he cares how he looks really, when you're a billionaire you can have pretty much any woman you want.

at the same time?

That's just about what I figured he would've looked like that back than. Maybe with a star trek uniform on though. Must've been laundry day. This pic screams fleshlight inventor also.

Look at the girl next to him, I bet once Gabe struck fame, she was like "I shoulda went with him to prom!"

Dat pair of glasses...
These are the same as Gordon Freeman's glasses...oh wait..

Those are some nice "screenshots" of Gabe Newell.

The funny thing is, regardless of his looks, this man proabably sleeps on a bed of 19-21 year old girls hotter than anything anyone here will ever even talk to.

he has well over 1.5 billion dollars in the bank

*(In December 2010, Forbes named Newell as "A Name You Should Know" mainly for his work on Steam having partnerships with multiple major developers.[9][10] In March 2012, Forbes estimated the net worth of Newell as $1.5 billion dollars, ranking 854th out of 1,226 global billionaires.[11])-wiki

he could take the shitty town you live in, buy it and burn it to the ground

and he made all that money doing something he loves.

I strongly doubt he's going to bed with a group of 19-21 yr olds...Strongly doubt that and even if he was by some grace of god able to hook that up, it's only because he paid for them.

I hope this is just a rumor

Who cares what he looked like in High School? The only thing I can't help but wonder after seeing that picture is if he was an asshole loud mouth back then too thereby instigating copious amounts of atomic wedgies and swirlies.

Asshole loudmouth or not, he probably still got quite a few atomic wedgies.

And now he makes more than all of those guys who stuffed him in his locker.... combined.

It's a nerd's world.

Its race between the release of ep3 and Gabe's increasing chance of a heart attack from demolishing all the pies..

I'm going for the latter

It just humans being judgmental as usual.

Wow.. that's really Gabe Newell? Well I'm usually the last one to take stabs at people like this but I finally think the mystery of who ate all the pies is finally solved.

lets hope this doesnt become a normal post on n4g. i dont want high school pics of david jaffe or cliffy b clogging everything up

I agree.Although,I suppose it is fairly interesting.

Some of the comments here really make life look bleak. I mean, I know that I am just an ant and Gabe makes more money in a day than I could make in 15 lifetimes, but do I really have to be reminded of it everywhere I go? Especially on a gaming news site.......

WTF is wrong with some of you people.

The Steam Deck Replaces the PlayStation and Xbox, Not the Switch

They really all came crawlin' back to Steam, didn't they?