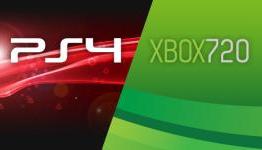 Forecasting competition between The Xbox 720 & PS4- And Which Will Come First?

Sure you’ve probably heard numerous times in the previous weeks or months all the hype about the coming of the next-generation of consoles.But the real question is who do you think will be better and would lead in terms of sheer capabilities and content?

I am hoping for the ps4 to do better. Sony just has better 1st party gaming talent than microsoft and as a Gamer I benefit most from that. I couldn't care less about the gimmicks that microsoft is trying to throw at its gamers like smartglass and kinect. As long as sony gives me unparalleled single player experiences I shall support them.

I don't care. I will have both.

Sony is using Vita in the same way as SmartGlass, it is also rumored to have a Kinect like sensor on the PS4, at the very least the PS4 could launch with a better version of the Move. So its not like Sony is adverse to gimmicks my friend. The first thing you said about the first party talent could very well be true, but the rest was a highly suspect statement.

I think the PS4 and Xbox 720 will release around the same time, it all comes down to price for me, I wont be buying a $500 console right out of the gate, these next generation machines are going to have to offer $299-$399 for me to even consider it.

I really don't care who comes out first as long as they don't hand us some unfinished or broken console with the excuse that they were trying to get their console out first. That is not going to cut for me at all. If you want to rush your console out and use me as your guinea pig while you claim that you will fix it ,eventually, forget that.Anyone who short changes us with features or allows their system to have a 40-50% fail rate next gen won't be getting my money no matter how much you tweak and fix it.

Sony's strong focus on core games and their first party exclusives deserve a more powerful system, will buy a PS4 regardless.

I won't be getting a PS4 until a few years after release, if at all.

yes of course fanboy, we know. Then you'll sell it and go on stupid rants saying how mediocre the games are and the online service is crap. Am I right?

I want the PS4 to do better but I think the 720 will. Not only does PS4 look like its coming later but the next xbox looks more gimmicky than what Nintendo is doing and will attract tonnes of casuals because of it.

I mean kinect, smart glass, virtual reality goggles?. Its like it doesn't even know what it wants to be.

im all for the PLAYSTATION 4 ill buy a nexbox somewhere down the line. even now the longest i ever had a 360 is about 3 months and that was just to play halo online and gears 2 single player then i sold the s**t outta the system.

Im getting what ever console my friends have. This gen it was the PS3 next gen it'll probly be the PS4.

I want the PS4 to come first and be more powerful.

Sony are committed to the hardcore whereas M$ have abandoned their loyal fans for the casual market.

I loved the original xbox, brought one at launch. I brought a 360 at launch too. The, around 2010-ish they lost me. The brand began to change into something I now hate.

Strange how you say "M$ have abandoned their loyal fans" all the while 360 owners buy more core titles than everyone else. Not to mention Halo 4, Gears, and Forza this year.

I would say "fail" but I think you knew that when you hit add comment.

Committed to the hardcore huh??

i never realized how hardcore

"Wonderbook - Book of Spells" is.

I'll be getting both so I dont care who "wins".

Sony definitely caters to the core gamer more. Microsoft is too busy trying to get a chunk of Nintendos casual players and is losing grips on what truly matters. Games for REAL gamers.

Funny that you mention REAL gamers just now that Microsoft released Spelunky on XBLA this week.
Now here is an extremely challenging and core game for REAL gamers, and not your typical cinemaatic-cutscene-QTE-fest-d umbed-down-experience we mostly see on console games nowadays. Highly recommended for anyone who actually likes a proper challenge.

Sony wasnt prepared for the media aspect that MS was working on putting into consoles & got caught w a left hook the the jaw BUT they hung in there & made what they had work.. Its not the best but it works & its free.. This nx time around, i believe they will indeed be prepared.. Ever since sony got the new CEO, many jrpgs have been gtn officially announced to be localized which is another ps3 downfall for the past 6 yrs... Things will level out this nx round & i doubt there will be any major differences between MS & sonys consoles.. Except for software & whoever gets the best exclusives that i personally like, will earn my money.. Im not buying all 3 consoles again

Agree 0Disagree 3
▼✖-+
SPAMInappropriate
Show all comments (20)
The story is too old to be commented.
40°

The Best Tom Clancy Games From The Franchise's Golden Era

The PS5 Is Still Paying For Sony's PlayStation 3 Mistakes