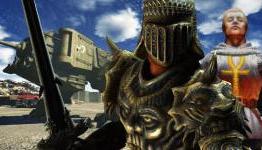 Steel Battalion: Heavy Armor has been a topic of discussion for all the wrong reasons, with most of the talk revolving around its technical issues. The game compounds the Kinect sensor's shortcomings by continually prompting players to make gestures that can't be interpreted with any degree of reliability. Many reviewers have been unable to complete the campaign, forming impromptu support groups to make sure they hadn't made any terrible mistakes - aside from becoming video game reviewers.

At this point it's safe to say that Steel Battalion has endured the most broken launch in recent memory. It would probably abort the mission and eject if the Kinect was able to read its frantic arm waving as anything other than an enthusiastic fist-bump. That said, this is certainly not the first time a game has stumbled out of the gate while on fire. Some releases have been so flat-out busted that their technical flaws became the stuff of legend.

Adhttps://store.steampowered.com/app/1488200/Symphony_of_War_The_Nephilim_Saga/?utm_source=n4g&utm_medium=native&utm_campaign=sow_n4g_native&utm_content=png
- Comments (0)+ Comments (0)
TopNewestOldest
The story is too old to be commented.
40°3

The story behind the Oblivion mod Terry Pratchett worked on