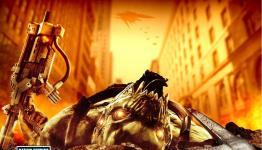 Gordon Bryant Says: "Ever since the PlayStation Vita was shown to have dual analog sticks, the gaming community at large was frothing at the mouth for a chance to play a fully functional FPS on the go, and with Resistance: Burning Skies, we finally have the first of what I hope is a long line of shooters available on the Vita. As expected, being the first fully-fledged portable FPS, the game is not without its flaws, but that's not to say it's unenjoyable; in fact, I quite liked it and, in some ways, found its shortcomings charming."

Its enough to hold me over till an actual FPS comes out. The SP was great, just really friggin short. The online is still a buggy mess though.....

Online works perfectly for me. My only complaint is that it can use more maps and game types.

That too. I still have yet to play a full "large" game though....it either disconnects in the lobby or cuts it down to 5 players and never adds anyone.

I also keep seeing the standing avatar glitch, the sound keeps cutting out, and the scoreboard for some reason keeps freezing in the middle of games (its still tallying, its just not showing you)

Yeah capture the flag or even assault or breach damn that would be awesome. really hope they will support this game with new maps and game modes.

I know, I've had people just freeze and become immortal while I'm shoothing them, I've teleported through walls and been shot when no one was around. They need to sort out the bugs in MP before they even think of DLC (although I hope they do end up having some CHEAP dlc).

I have absolutely never had any of this happen to me.

game really got an awesome atmosphere, but nothing more, story was very blant to be honest... Sony, never give nihilistic another game to make, they are really not on your level
oh and gameplay was very very good, but yeah...

the controls of the game are very tight and work very well. The Musical score is awesome and a bit under used in my opinion. I have yet to try a MP match as i just finished the campaign tonight, but tomorrow i will give it a shot as i want my platinum trophy.