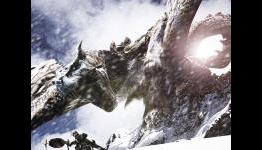 We've heard little about Monster Hunter 4 since its announcement, but that will change shortly. Capcom updated the Capcom Summer Jam official site today with notice of a Monster Hunter series stage for the weekend event. The stage will include the latest information on MH4.

Resident Evil 6 will also be in the spotlight as part of its own stage.

PS3 and/or PSVita for MH4 please.

No , no new girlfriend(A) She is everything to me! Sex is a lot better than gaming:) ^^ And she is sweet to me!

Wait a minute. Is that a scripted skit using Monster Hunter 4's graphic engine, or was that representative of gameplay?

Because Honestly, I'm the biggest MH fan in the world.....well, maybe in the west........this video doesn't look like "Monster Hunter", it looks more like "Monster Avoider".

I don't know how any Monster Hunter fans could be excited for this crap. I'm not saying it's bad or whatever, what I'm saying is:

As a Monster Hunter fan, when I see the name Monster Hunter 4 and think of the potential that holds when looking at a few of Capcom's latest works like Dragon's Dogma and Lost Planet 2, then see this link and click it and see THAT video.............. I would like to SLAM MY HEAD AGAINST A BRICK WALL many times, roll up in a ball on the floor and just cry for about 47 hours, then go down to Capcom and find whomever it is that makes decisions concerning Monster Hunter and Johnny Cage punch him right in his RETARDED BALL SACK !!!!!,

C'mon Capcom!!! Why do you hate Monster Hunter so much that you would just let it become SO stagnant and meaningless just for "potential money", instead of giving this franchise the love and dedication it deserves to reach it's potential?

And how did that "potential money" work out for you when you decided to cancel Monster Hunter's next gen debut on PS3, where it could have started to reach it's potential because "PS3's too expensive to develop for whah whah" and instead put it on Wii because of it's install base?

Oh, that's right....there were PS2 and PSP Monster Hunters that damn near sold in a week what Tri has sold in it's lifetime.........idiots.

Can you imagine if they weren't idiots and actuall developed Monster Hunter 3 for PS3? Timeline wise it would have probably looked as good as Lost Planet 2. Instead they develop crap like Lost Planet, and Dark Woid and alot of other things that really went places........./sarcasm. Monster Hunter is too expensive to develop as a next gen IP, yet all that other crap you sell was worth the investment? Again.......idiots.

Umm, isn't Tri the best selling console MH to date? If it is, not sure why Larry L is trying to say PS2 MH sales > Wii MH sales

Monster Hunter 4 will be different than Monster Hunter Portable 4. MH (number) are on Nintendo systems so far. MHPortable games, are on Sony hardware.

I really dont care about MH4 but if it gets the vita to move some units im all for it.

I thought Capcom is in some sort of exclusivity deal with Nintendo over Monster Hunter, making a PS3/Vita release unlikely?

If it's not true and Monster Hunter is released on the Vita and see's a western release, that would be the tipping point for me picking a Vita up.

Monster Hunter 4 for 3DS only plz!

That's not even remotely funny dude.

Hopefully not an exclusive! I will pay 100 bucks if it comes to the vita..

Capcom loves money too much for it to remain 3DS exclusive. We all know it's true.

Now why would you willingly want to cut out the original fanbase? That's just plain rude.

As mentioned earlier it would be great for the Vita and Playstation 3 and I see no excuses to not include cross platform play.

Not Spoil it...just give us some hints to let us form our own conclusions.

I personaly hope it's true...I know the clone thing is a terriable idea but to save Ada Wongs character after she appears as a cold hearted murder in RE6...totaly out of character. I know she's killed but only the people that she's been ordered to, she's not the type to kill innocent people.

Idk why everyone wants a MH for ps3. The game does look pretty cool and I've wanted to play one but we all know that Capcom will ruin it with First Day DLC and other Disc Locked Content so I am not too excited.

I hate Capcom's lame DLC tactics just as much as the next guy. But words cannot describe how long I've been waiting for a Monster Hunter title to hit the PS3. The promise of a next gen MH title was part of the reason I bought my PS3 on launch.

Day one DLC or not, I would still love Capcom for bringing an online MH title to the PS3.

I'm still waiting for MH3G to be localized in America. That said, I need more Monster Hunter!

Resident Evil 5 and RE6 Will Be Very Different Remakes, If They Happen

Resident Evil 6 10 Years On - A Mismatch of Ideas